Mother Pollard was probably the oldest participant in the Montgomery Bus Boycott. Apparently no one knew her actual age or her first name, she was just called Mother. After several weeks of walking painfully to her destinations, people had urged Mother Pollard to drop out of the boycott and ride the buses. Mother Pollard refused. She made an offhand comment in response which has since become famous. She said: “My feets is tired, but my soul is rested.” 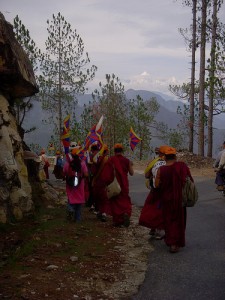 I think this is how the Rangzen Marchers must be feeling right now, feet(s) tired but hearts at rest, when they glimpse the snow capped peaks in the distance and know they are getting close to home. Looking through the photographs in their website (tibetanuprising.org) I notice a number of old palas and amalas among the marchers. One old man has a cane in his right hand a national flag in his left and a portrait of His Holiness hanging from his neck. But he looks good for another five hundred miles.

Most freedom struggles have at least one good march in their stories. There is of course Mao’s Long March, which has been much mythologized by the CCP, but whose core narrative has been effectively demolished a couple of years ago by Jung Chang and Jon Halliday in their Mao: The Unknown Story. They effectively proved that even the heroic battle at the Luding Bridge (which Tibetans call gya chamsam chenmo and believe was built by Thangton Gyalpo) was virtually invented – cut out of whole cloth – by communist propagandists. 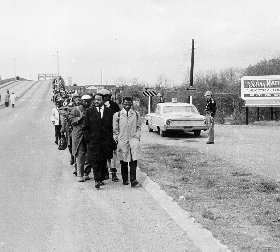 But marches in non-violent freedom movements though perhaps less spectacular or dramatic convince by their understated nature. I met an old black minister in Dharamshala once who had marched with Doctor King from Selma to Montgomery, Alabama. These marchers not only endured heat, dust and other hardships of the road, but were set upon by state troopers and deputies with dogs, billy clubs, tear gas and bull whips. Seventeen marchers were hospitalized and one was killed. After two more marches the conscience of the nation was awakened and President Lyndon Johnson signed the Voting Rights Act of 1965.

Then we have Gandhi’s Salt March, from his Sabarmati Ashram to the coastal village of Dandi in Gujurat (about 390 kilometers or 240 miles) on March 12, 1930. It was derided by many at the time, especially in the English language press in India. The ultra nationalists thought that such symbolic action was ridiculous and contemptible. Gandhi’s choice of the salt tax as a symbolic target of his march was initially met with incredulity even by the Working Committee of the Congress.

But the salt tax was a profound symbolic choice, since salt was used by nearly everyone in India. It represented 8.2% of the British Raj tax revenue, and most significantly hurt the poorest Indians the most. Gandhi felt that this protest would dramatize Indian Independence in a way that was meaningful to the lowliest Indians. It was also the first action to demonstrate Purna Swaraj or complete self-rule which was declared earlier that year, on January 26th, by the Indian National Congress.

The symbolism of the March to Tibet is in its destination. That is where the marchers, through their exertion and sacrifice, are telling us we must we must commit all our energy, all our resources, everything, to achieve the independence that Tibetans called out for in the streets of Lhasa, Labrang, Kanze and other places in Tibet, earlier this year.

The Salt March failed to win major concessions from the British, and 80, 000 Indian were jailed as a result. But the campaign had a significant effect on changing world and British attitudes toward Indian independence, and caused large numbers of Indians to actively join the fight for the first time.

I know some people have been skeptical of the March. A former TYC president made a dismissive comment about it in a meeting in New York this year. And perhaps there is some ground for a little skepticism. In 1995 Dharamshala politicians from the United Association (chigdril tsokpa) and the three regional parties (cholkha sum) organized a Peace March to Tibet. The goal was later switched to Delhi. Halfway, at Ambala, the march-leaders hustled everyone on buses claiming that they had to be in New Delhi to meet the Dalai Lama. Thupten Ngodup who had volunteered for the march, later expressed his strong disappointment to a friend.

But this time the Marchers have proved immensely courageous, determined and resourceful. I have lost count of the times that their leaders, or a contingent of the marchers, have been arrested. Somehow they keep coming back. When I saw the photograph of what seemed like at least a few thousand Indian policemen filling the side of a mountain road in Utterkhand, I thought it was all over. But I was wrong. Five non-Tibetan volunteers on the March were issued “Quit India” notices. Whether they’ve actually quit is not certain. The marchers also had the Indian authorities stopping their food supplies and impounding their trucks, but they seem to have overcome those problems as well. Probably the worst moment for the marchers must have been when the Dalai Lama ordered them to give up the march. His Holiness told the press (Reuters) that he thought the march was dangerous and pointless.

Of course it is dangerous business. One marcher has already died. If the Indian authorities allow them to cross the border, they could be shot by the Chinese. They would definitely be arrested and jailed. I am informed that tomorrow, Tuesday the 17th, is D–Day. The marchers will be arriving at Dharchula, the last border town before the “inner line” of the Indo-Tibet border. My informant tells me that “It seems that the police will definitely stop the marchers and arrest everyone here tomorrow.”

Yet I know that the march will somehow continue. I can’t tell you why, but I have absolute faith in the courage, determination and resourcefulness of the leaders and the participants of the March. All I ask of the readers is that he or she forward this article to as many friends and acquaintances, and bring as much public attention to this history making event. Go to the marcher’s website (tibetanuprising.org) and put in your greetings and encouragements. They should know that we are with them always.

I cannot help directly but tomorrow I am going to burn some juniper and sage and make a sangsol offering with my wife and kids. I will offer a prayer to all the old gods and goddesses of Tibet (the fierce gods who once gave us victory over the Tang Empire) to watch over the marchers, to protect our people and guard the integrity, the life-force (la) of our ancient nation against the gya-dre demons of China.

Among the marchers is an ex-paratrooper who has received a medal of valour from the prime minister of India for single-handedly wiping out two Pakistani bunkers at Kargil. Right now these Tibetans are marching peacefully for freedom. One day these same people could be marching with rifles. What happens will in large part be dictated by how China deals with its Tibet problem. But the March will go on.

53 Replies to “The Long March Home”