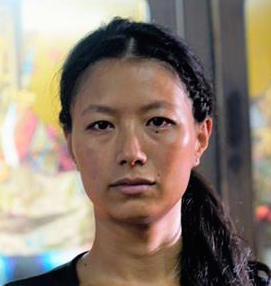 Review of the film Sweet Requiem by Jamyang Norbu

I was going to write the knockout review for Tenzing and Ritu’s new film The Sweet Requiem, but the poet Tsering Kyi from VOA beat me to it. She had seen the movie in early May at a special showing in Washington for the US Congress Human Rights Commission. Tsering-la had another advantage over me in that she herself had made a similar perilous escape from Tibet, as Dolkar in the film had. Hence the film had a harrowing immediacy for our poet/reviewer that she vividly manages to get across in her Tibetan language review Unbearable Memories.

I can make no such such claims, but the movie broke my heart anyway. It brought back memories of the interviews I conducted in the late 90s and early 2000 with escapees, writing reports and articles about their perilous journey across Nangpala and of their being shot “like dogs” just when they were crossing the high pass into Nepal.

The Sweet Requiem is compellingly realistic in recreating the icy bleakness, peril, pain, fear and near hopelessness of these escape attempts. The scenes were shot in Ladakh but it is apparant that at the altitudes and terrain our filmmakers and actors had to work, they not only suffered discomfort but possibly hypothermia, AMS and other dangers as well. All Tibetans owe a debt of gratitude to them for creating this moving narrative memory of a traumatic but important episode of Tibet’s tragic contemporary history, that most of us are rapidly forgetting.

The impressive cinematography is not limited to the escape scenes, but also comes across in less dramatic moments as well. There is a scene of the Jhangthang at night. A small solitary yak-hair tent stand before a giant snow covered mountain, which looms over it in the darkness. Inside the tent, by the smoky light of a small fire, the nomad Migmar and his wife anxiously go over their plans to send their older daughter Dolkar to India to get an education and meet the Dalai Lama. The two little girls sleep beside them, but Dolkar’s dark eyes peep out over the shaggy blankets reflecting her mother’s concerns.

The escape doesn’t go well. Migmar enlists the reluctant help of a guide Gompo with the payment of a zi stone. They meet a group of hapless escapees, one of whom, an old monk, is definitely not up to making the journey. Everything quickly goes downhill and there are squabbles and recriminations. A frustrated Gompo sneaks off one night, but gives the zi-stone to a half-asleep Dolkar. The next day before the remaining group gets to the Nangpala pass Chinese border guards gun down Migmar and another man. One escapee grabs little Dolkar and manages to flee the scene.

Twenty years later we find Dolkar now grown and living in the Tibetan colony of Majnukatilla in Delhi, celebrating her 26th birthday with her friends. She works as a beautician but aspires to go back to college. We see her working out at a Bollywood style dance studio, enjoying herself, yet the small pleasures in her life are subsumed by her personal tragedy. We see this in her constant yet rarely successful efforts to phone her sister and mother back home and in her repeated viewings of videos of immolations from Tibet on her smartphone. She is also reminded of the immolations in Majnukatilla where young activists organize vigils and prayers to commemorate the tragedy. One of the activists, Dorjee, has a crush on her.

The casting of Tenzin Dolkar as Dolkar is an inspired one. She carries the film. She has a strong face, conventionally unglamorous but classically Tibetan. It is a face that is able to express a range of emotions: joy, sadness, uncertainty, concern and anger, effortlessly with no suggestion of artifice.

The film moves into conventionally dramatic territory with the arrival of the former guide Gompo to Majnukatilla. Two Chinese spies (the least convincing characters in the film) also make their appearance, and they pressure Gompo to carry out some shady task for them in Dharamshala. But Dolkar recognizes Gompo and shadows him around the colony eventually accosting him –– and moving the film to its tragic resolution. I’m going to stop now. My daughter, Namkha, who’s editing this post tells me I should avoid spoilers.

But I must absolutely discuss the final scene of the film, which is a flashback to the beginning, to Dolkar as a little girl. She and her father are swaying to and fro in the back of a battered truck, slowly pulling away from their home. Dolkar’s mother stands before their black yak-hair tent, holding her younger daughter closely by her side, the grey smoky light of the early morning defining the arid landscape.

This scene has all the power and poignancy of the conclusion of Satyajit Ray’s Pather Panchali when Apu’s ill-starred family leave their ancestral village forever, also at dawn, on the back of a bullock cart with a single kerosene lantern swinging between the wheels. Serendipity perhaps, but both films conclude in near exactly the same way, just before the end credits roll –– with the swaying face of a child staring vacantly at a slowly receding space in time that was once home.

2 Replies to “A PASSING TRAGEDY”