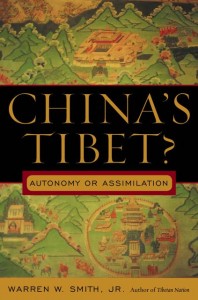 For a book dealing with Sino-Tibetan relations Warren Smith’s new work takes an unusual standpoint. It refuses to assume the currently fashionable “a plague on both your houses” attitude; i.e. to regard the present problems of Tibet not just as originating from the harsh policies of the Chinese government but from the blunders of the Dalai Lama and the intransigence of exile Tibetans as well. Smith ignores such standard red herrings as Tibetan “failure to engage with China”, or Tibetan “hopes for American support” and instead sees the situation in stark and simple terms with Tibetans as victims and the Chinese as the victimizers. This is not to say that the book lacks objectivity or that Smith is taking sides. He is clearly aware of the numerous mistakes and even cupidity of the Tibetans in their dealings with China, but correctly sees these as secondary, sometimes even irrelevant to the overpowering reality of China’s brutal occupation and relentless assimilation of Tibet.

Warren Smith is well known to many Tibetan readers (of the Indian edition) of his masterful history, Tibetan Nation. For a book written by a non-Tibetan it is one that quite consciously attempts to understand and explain things from a Tibetan point of view. One Tibetan reader has claimed to appreciate Tibetan Nation because of its “tsampa smell”. Lhasang Tsering la of the BOOKWORM in Dharamshala, personally recommends Tibetan Nation to those seeking an up-to-date one-volume history of Tibet.

So it should come as no surprise that the introductory chapters in this new book, laying out the historical background, are impressively thorough. It is evident that Smith’s understanding of Tibetan history is not only broad and objective, but is appreciative of the Tibetan intellectual point of view. Quite a few experts tend to view Tibetan history largely from a Chinese or left-ideological perspective while some go to the other extreme of regarding Tibetan history and culture as largely a product of Buddhism. Smith’s work is a welcome corrective.

The first half of Smith’s book, which deals with China’s efforts to assimilate Tibet and to rewrite Tibetan history to conform to this new reality, is extremely useful because little has been published in this regard. Warren Smith’s accounts of Chinese propaganda efforts on Tibet are detailed and accurate. He provides extensive analysis of the works of China’s propagandists on Tibet as Anna Louise Strong and Israel Epstein. He also provides, on the book’s website, detailed critiques of Stuart and Roma Gelder’s The Timely Rain, Han Suyin’s Lhasa, The Open City, and also the Chinese government’s version of Tibetan history, The Historical Status of China’s Tibet. Although all of this is from a previous era it provides an important and clear picture of the continuity of Chinese propaganda effort and demonstrates how vital Beijing regards the contributions of pro-Chinese western journalists and academics in propagating and legitimizing the official view of “China’s Tibet”.

The book also highlights Beijing’s current propaganda programs and the varying degrees of success it has had in spreading its “China’s Tibet” message to the outside world through China’s own Tibetologists, pliant academics in the West, cultural festivals, theme parks, films, free DVD’s and publications. Smith discusses the seminal 1993 meeting of the External Propaganda Committee of the PRC Propaganda Department where China’s successful propaganda strategy on Tibet was worked out and launched.

Smith also tackles China’s propaganda efforts within Tibetan society, and the impact that such misinformation has had, especially on the younger generation. He provides detailed information of such propaganda institutions as the Museum of the Tibetan Revolution and it’s most infamous and exhaustively invented exhibition of the “evils” of old Tibetan society, The Wrath of the Serfs. Warren Smith devotes a chapter to propaganda films, especially the feature film, Serf, made by a PLA film company in 1963. This unapologetically racist, debasing and viciously false representation of old Tibetan society and culture was enormously significant for Chinese audiences in the formation of their chauvinistic views about Tibet and China’s role there. The movie was shown all over China and Tibet.

Smith’s coverage of the Cultural Revolution in Tibet is thorough and provides an exclusive window on events through selective highlights from the autobiography of Rinbur Tulku, who witnessed the destruction of temples, monasteries and monuments in and around Lhasa. Rinbur Tulku provides a detailed account not just of the destruction and desecration, but also of the deliberate process by which Chinese authorities systematically looted the shrines and temples of all valuable jewelry, precious metals and objet d’art that were all trucked to China before the supposedly chaotic destruction took place. Smith also demonstrates that the events were not spontaneous and chaotic as claimed by China’s apologists in the West, and that Tibetan participation in the destruction clearly came about due to pressure and coercion.

Smith’s coverage of the history of the Sino-Tibetan dialogue or negotiations, and the lack of any kind of development in this regard, is probably one of the most dispassionate, critical and detailed accounts we have to date. This alone will make the book worth reading for many students of Tibetan affairs. In a detailed and systematic exposition Smith makes it clear that there is no hope of “genuine autonomy” or “meaningful autonomy” for Tibet, as the Dalai Lama has been advocating. He further explains that the very idea of even a minimal autonomous status for Tibet was never one that had ever been entertained with any degree of sincerity by Beijing, even when the guarantee of autonomy was first undertaken by Chinese leaders at the signing of the 17 Point Agreement in 1951. Smith effectively underlines his contention with a hard-nosed exposition of the doctrinal realities involved. “The ultimate goal of Marxist-Leninist-Stalinist-Maoist nationalities doctrine was not autonomy, but assimilation. Autonomy in Marxist-Leninist theory and practice was a temporary tactic intended to reduce minorities’ resistance to incorporation into Communist states.”

Smith’s book lacks a clear narrative thread and certain chapters read like separate essays. This might be considered a virtue by those who find it heavy going to read an academic work all the way through, and prefer to sample sections of it at their convenience. Whichever way one goes about reading it, the fund of information and insight to be gained from this book ought to bring about a clear and disturbing appreciation of what China actually intends to do about Tibet.

Warren Smith is not an optimist regarding the future of Tibet. He nonetheless thinks that Tibetans might have a small (and only) chance if they were to give up their hopes for an autonomous status under China and assume responsibility for “the survival of their own national identity and their national destiny.” His final sentence is a slap in the face of those who hold that the Tibet issue can only be resolved through “negotiations”, “a change of heart in Beijing”, or on China becoming a democracy . Smith let’s us have it straight up. “The final result of the Tibet issue will be that Tibetans themselves will determine their fate, or they will be unable to do so.”

74 Replies to “Discussing Tibet, Without the BS”