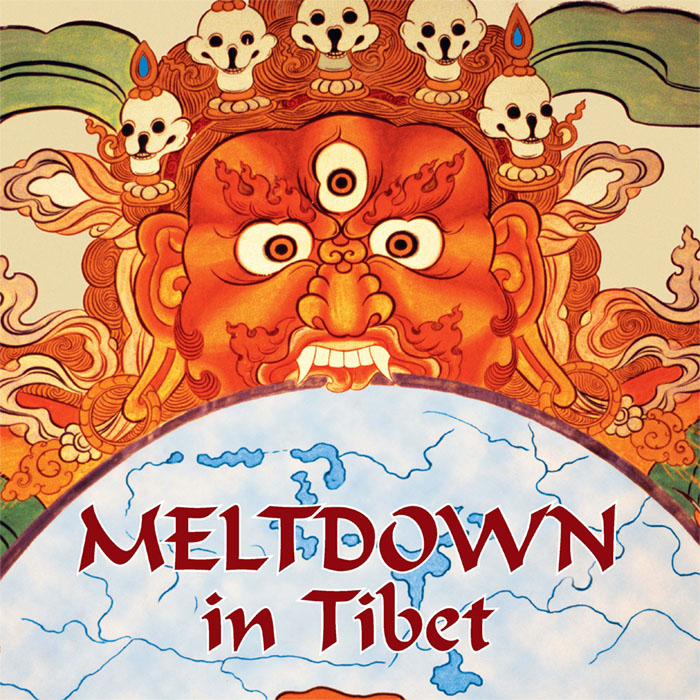 Ecocide on the Third Pole

MELTDOWN IN TIBET
A personal take on the politics of water in Tibet.
A film by Michael Buckley
Wild Yak Films
reviewed by Jamyang Norbu

Al Gore has come out with a new book (Our Choice: A Plan to Solve the Climate Crisis) nicely timed to be in the stores before the Climate Conference in Copenhagen this December. Among the important discussions in the Danish capital I expect the melting of the polar ice caps will feature significantly, and which the public will be informed about on CNN the next day with accompanying images of polar bears swimming in ice-less seas or penguins looking lost.

One thing we can be fairly sure that won’t be discussed at the conference (or in Al’s book) is the ecological crisis in another part of the world, as critical in some ways as that in the Arctic or the Antarctic. Some experts have gone so far as to refer to the area as “the third pole” of global warming. That area is, of course, the Tibetan plateau.

Glaciers in the Himalayas and the Tibetan plateau are now retreating so rapidly that even a Chinese official or two have begun to express alarm. “Due to global warming, glaciers on the Qinghai-Tibet Plateau are retreating extensively at a speed faster than in any other part of the world,” Qin Dahe, a former director of the China Meteorological Administration, said recently. “In the short term, this will cause lakes to expand and bring floods and mudflows. In the long run, glaciers are vital lifelines for Asian rivers such as the Indus and the Ganges. Once they vanish, water supplies in those regions will be in peril.”

All Tibetans and supporters are well aware that the impending and near inevitable ecological catastrophe on the Tibetan plateau is not only a result of global warming but, in equal if not greater part, the consequence of Communist China’s extreme exploitation and destruction of the “mountains and waterways” (ri-lung) of Tibet.

To draw attention to this “inconvenient truth” about the Tibetan plateau a new documentary has been released , which raises some important but disturbing questions:

In his forty-minute film, Meltdown in Tibet, filmmaker Michael Buckley uses undercover footage and stills, to give us an unsettling glimpse into China’s vast and potentially catastrophic dam building projects in Tibet. He shows us how, to make way for mega-dams and mining projects, Tibetan nomads are being forced off their traditional lands. But the filmmaker tells us this is only the tip of the iceberg. What looms ahead is a huge water crisis that could affect millions in heavily populated regions of China, India, Pakistan, Bangladesh, Nepal, Vietnam, Thailand, Cambodia, Burma and Laos.

I knew Michael from the eighties when he co-authored the first Lonely Planet Guide to Tibet, which I reviewed for the Tibetan Review. Since then Michael has traveled all over Tibet on foot, mountain bike, landcruiser and in this film, on an inflatable raft. Besides the Lonely Planet Guide, Michael has authored a number of other travel books on Tibet, but his growing concern with the twin devastation of the Tibetan environment and way-of-life of its people, have driven him to make and release this film. When Beijing gets hold of this it could probably spell finis to his traveling days in Tibet.

The film draws its power and immediacy from the fact that Michael actually rafted down the rivers he discusses, and that he captured on film the spectacular and overwhelming quality of these greatest of Asian waterways. That he secretly filmed some of the very dams the Chinese were building on these rivers, provides the documentary the extra seal of authenticity, as it were. I may be getting a little picky here but the film seems to slow down a bit when it moves away from the rivers and goes into a general discussion on the Chinese presence in Tibet, and on Tibetan Buddhism and conservation. Nonetheless, Meltdown In Tibet is a very dramatic, informative and even entertaining film that strikes a powerful blow for the environmental and Free Tibet cause. Absolutely a must see for Tibetans, supporters and friends.

Michael has offered to send free copies of the DVD to Tibetan organizations and support groups to use for public showings to raise awareness and a tool for discussions and other forums on the issue. If you are putting on a special screening you could ask for a Blue Ray disc. (Check out the trailer. Also check out the website MeltdowninTibet.com for more information.)

Rangzen activists could use this film and the Copenhagen Conference, not just to condemn China’s environmental rape of the Tibetan plateau but to make the valid point that this unwelcome contribution to global warming is the direct result of China invasion, occupation and exploitation of Tibet. Furthermore, in the past, in independent Tibet, the nomads, the farmers and the government itself had been responsible stewards of their land and wildlife – a fact which Michael himself emphasizes in the film. I am writing an essay on traditional environmentalist beliefs and practices in old Tibet, that I will try and finish soon, which could provide some more information on this particular subject.

His Holiness made this unusually strong statement a couple of years ago. “It is of immense importance to inform the public that the ecology of Tibet needs special care. The Communists recklessly use natural resources for two reasons: first, they are ignorant; second, they don’t care.” All those who want to participate in “informing the public” and other Tibet related activism during the UN climate change conference in Copenhagen this December, check out tibetthirdpole.org.