Bibi Netanyahu’s recent run-in with the Obama administration got me browsing through stuff I had jotted down over the years on the Palestinian–Israeli conflict. I came across an observation I made some years ago about a character trait the Palestinian leadership and exile Tibetan leadership seemed to share.  The piece is somewhat dated regarding events in Gaza and the West Bank, but it is sadly and unchangingly contemporary on Dharamshala. JN.
. 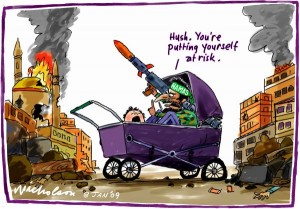 From the Gaza strip to Dharamshala, the cult of victimhood is embraced from a shortsighted perception of the advantages it seemingly confers on weaker parties in their disputes with more powerful foes. Of course, different cultures go about this in their own distinctive ways. Whatever military or political purpose the Palestinian suicide bomber may serve, one can clearly discern the underlying “emotional-blackmail” function it serves as the “victim as selfless avenger”. Hamas keeps firing rockets into Israel, which serves no perceivable military function, only killing an occasional Israeli civilian or two, at the most. But Israeli military retaliation is deadly, the latest one killing about two hundred Palestinians. And, sometimes one cannot help but feel that this is perhaps what Hamas wants, to demonstrate to the world (and convince itself) how awful Israel is, and how much of  a victim the Palestinian people are.

At the other end of the spectrum, the Tibetan leadership has developed the cult of the “victim as compassionate exonerator” exemplified in stories of Tibetans  who when thrown in Chinese prisons spend their years meditating and forgiving their enemies; or in claims of a people so spiritually advanced that they have moved beyond crass Western ideas of nation states and political sovereignty, and are instead only imbued with concern for the spiritual welfare of their Chinese oppressors. Such exaggerated assumptions to moral superiority provides a psychological crutch to the victims, reconciling them to their condition, and furnishing them the excuse not to make the real changes necessary to their political culture and traditional mindset, so that true individual empowerment and a measure of political success could be eventually attained.

Tibetan leadership views victimhood not as a problem to be solved but as an identity to be nurtured, and takes inordinate pride in claiming exile Tibetans to be “the most successful refugees in the world.”  The former TYC president Lhasang Tsering is one of the few Tibetans who have deplored this way of thinking. In an interview with BBC he commented that rather than taking pride in being the most successful refugees, Tibetans should be ashamed of the fact.

Palestinians go on performing their futile scenario of victimhood: the grim funeral processions, howling women in black, waxy-faced martyrs in open coffins, the firing of guns in the air by enraged survivors. You saw the images in Time magazine back in the sixties, and somehow you know you’re going to see it on CNN for years to come. The Tibetan leadership in spite of fifty years of exalted talk of negotiations, middle-way, world peace and democracy, is fundamentally unable to evolve beyond anything more than a stagnant old theocracy that still cherishes the hope, that somehow, something could be worked out with Beijing, its imperial patron – choyon jindak chempo – if  we performed just one more kowtow (this time an exceptionally cringing and obsequious one) and made one more, just one more (for now) concession. Plus ça change, plus ç’est la meme chose.