When I saw photographs of the tough, determined looking monks digging through the ruins of Kyegu town, I was struck by a sense of helplessness and frustration. Probably, some of you readers felt that way too. I wanted to be out there with those monks, helping to find survivors in the rubble, or at least unearthing the bodies of those that had perished — cleaning them up, restoring some dignity to them, before taking them away to be cremated.

The only thing I could actually do that was perhaps faintly comparable, in a feeble academic sort of way, was to go through my library and my notes and dig up all the information, geographical, historical, ethnological, cultural — everything I could — on the people and land where the earthquake had struck. I wanted, in my minds eye, to see all those who had perished there not as faceless victims, but as actual, flesh-and-blood individuals, with real lives and stories, and try to establish the role that they, their forbears, and their homeland or phayul had played in the ongoing story of the Tibetan people and civilization.

The area where the earthquake struck is known as Ga Kyegudo (spelled skye rgu mdo or skye dgu mdo), the Ga or Gaba (sga-pa) being name of the people of the area. Khampas tend to pronounce Kyegudo as Jyekudo or Jyegundo, softening the hard “k” sound to a softer “j or “ch”. They also do this in the case of the official title “dzasak” which Khampas pronounce as “chassak”. “Jyegundo is sometimes contracted to Jyegu, or these days, to the more sinicized Jiegu. One explanation I have come across for the name Kyegu is that it is a contraction of  “kyelwa gu” or nine lives. The claim being, I suppose, that one life lived in these beautiful and blessed grasslands is as fulfilling as nine lives lived elsewhere. But there are other explanations.

The suffix “do” denotes that the place in question is located at the confluence of two rivers, as in Chamdo, Dhartsedo and so on. In the case of Kyegudo the two rivers or streams are the Dza-chu and the Peltang-chu. The broad geographical description of the whole territory is Kham-toe, or Upper Kham. 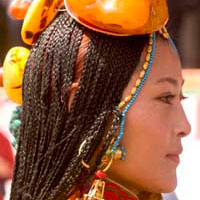 The region in which Kyegudo is located, is nowadays called Yushu. Tibetans claim the name is derived from “yul shul”  or “yul gi shul“,  literally, “vestigial land” (of the Ling Gesar epics).  Yulshul is the land where Gesar’s beautiful queen Singcham Drugmo was born and where her father Ga Tempa Gyaltsen ruled. Because of this connection with Gesar’s queen, Drugmo, the women of Yushu have the reputation of being beautiful and regal. 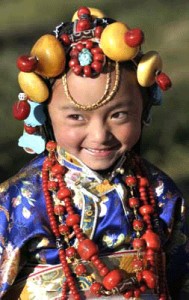 Historically, the Yushu area became part of the Tibetan empire at the time of Songtsen Gampo. With the fall of the empire in the ninth century this area like the rest of Tibet broke apart into separate tribes and principalities. In the middle of the 12th century the region was united under Trebo Alu, the first king of Nangchen, and Yushu was incorporated into the Nangchen kingdom. The name Nangchen is said to be a contraction of nanglon-chenpo, as the descendents of an eminent (chenpo) and inner (nang) minister (lonpo) of the Tibetan emperor settled in the region. The Nangchen kings ruled over 18 inner tribes and 25 outer tribes. The Gaba tribe belong to the latter category. Nangchen was one of the six kingdoms of Kham, the others being Chagla (Dhartsedo), Derge, Lhatok and Lingtsang and Mili.

With Manchu colonial expansion into high Asia, Yushu came under the nominal control of the amban at Sining. But the growth of Chinese Muslim (Ma) military power in Gansu at the beginning of the last century further weakened traditional Tibetan rule in the region and a Muslim garrison was established at Kyegudo in 1915. In1928 the Chinese Nationalist government established Qinghai as a province and some areas of Gansu, including Yushu, were incorporated within it. Since 1951, Kyegudo has been the capital of “Yushu Tibetan Autonomous Prefecture” which an official handbook tells us consists of six counties, 121 monasteries and with a population of 237,000 people. The town of Kyegudo has a population of 37,000.

Kyegudo has traditionally been one of the most important centers and crossroads for trade and commerce in Tibet. It is the hub of many important routes. One road leads to Lhasa via the nomad center of Nagchu. Another leads to Chamdo and Derge. One road north leads to Kumbum and Sining, while an adjacent route goes to Tsaidam and Mongolia. But the most valuable route is one that runs from Kyegudo to Dzachukha, Kanze and finally Dhartsedo. This route is called the Chang Lam, as it is the northernmost routes from Dhartsedo to Lhasa. It is also called the Jha Lam, since most of the tea imported to Tibet is transported from Dhartsedo to Kyegudo and finally Lhasa.

I interviewed a Lithangwa who had worked on the yak caravans from Dhartsedo to Kyegudo and Lhasa. He told me that about 100, 000 (bum chik) yak loads (jha-khyel) of tea were transported through Kyegudo from Dhartsedo every year. About 60,000 loads were taken down to Lhasa and Central Tibet, the rest distributed to other areas of Amdo, Tsaidam and Mongolia.

Silks, brocades, chinaware, khatags, dhar, metalwork from Derge, medicinal plants, fine woolen material from Central Tibet, cotton cloth, cigarettes and other goods from India also passed through Kyegudo. The more valuable and expensive products were transported by mules. Some raw wool, untanned hides, and, of course, all of all tea, were carried on the back of yaks.

My informant told me that mule caravans took about three months from Dhartsedo to Lhasa, but yak caravans took at least ten months, if all went well. It could take longer, what with the snow, the incredible cold of the Changtang, and the occasional bandit. He boasted that many of these caravans were enormous, some easily consisting of 3000 yaks. The missionary, Susie Rijnhart writes of an encounter (in 1897) in the northern grasslands “We met immense caravans of yaks with loads of tea from Jyékundo, as many as 1,500 and 2000 yaks in each caravan, with the merchants well-dressed and well-mounted, and drivers some of whom were women and girls.” 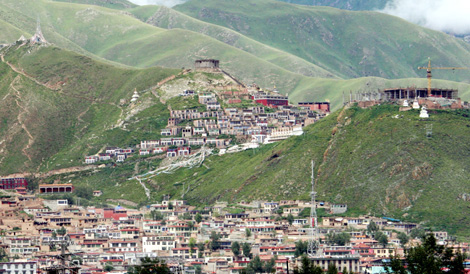 Although Kyegudo was, in the past, not a large town, many Tibetan merchants had permanent homes there. Quite a few of the townspeople were also nomads, and moved back and forth from a nomadic existence to an urban one, taking advantage of both worlds. In the decade before the invasion Kyegudo became enormously rich and prosperous. Some Chinese merchants lived there too, but probably found it difficult because of the altitude and cold. This is probably why the present population of the place is 97% Tibetan, as I understand. The prosperity of Kyegudo depended not only on it being a vital hub of trade in Tibet, but also as the surrounding grasslands could sustain the enormous herds of yaks necessary for transportation.

The French ethnologist Andre Migot who visited Kyegu in 1946 noted “the real wealth of the region reside in its grasslands.” He also wrote how enormous the herds of yaks were that lived of the pasturage, and how wealthy the herdsmen were. In spite of the altitude (3700 metres) and the short-lived summer, barley, beans and various vegetable crops do very well there. 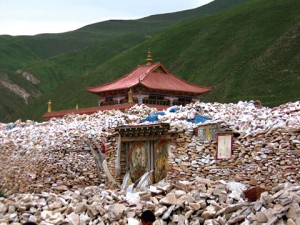 Dhondup Ling Sakya monastery, on the hill behind the old town, is the main monastery in Kyegudo. The site was consecrated by Drogon Chogyal Phagspa, spiritual preceptor to Kublai Khan.  Outside the town is the famous Gyanak Mani, the largest mendong, or mani-stone mound in Tibet, or, for that matter, the world.  Nearby are the two Karma Kagyu monasteries, Domkar and Trangu. Other Kagyupa monasteries as Zurmang, the monastery of Chogyam Drungpa Rimpoche and Benchen monastery of Chime Trulku, are further away.

Nearly all these monasteries were destroyed following the great Khampa Uprising of 1956, when the tribes in the region rose up against the Communists. During the Cultural Revolution what was left was razed to the ground. The sacred stones of the Gyanak Mani were used for paving-stones and to construct latrines for the Chinese military and civil personnel.

In mid-summer when the grasslands are covered with red blue and yellow wildflowers – mile after mile of a kind of rainbow carpet – nomads from all over the region, some as far away as Nagchu come together for a major annual gathering. This event can perhaps be best described as a happy fusion of multiple picnics, a week-long party, community dancing, religious observation, informal beauty parade, and an exciting horse festival, where the men (all dressed to the nines) show off their sensational equestrian skills. This marvellous gathering is held at Barthang, a wide plain twenty kilometers south of Kyigudo town, at the confluence of the Peltang chu and another stream the Zi chu.  Further south the river joins the Drichu or the Yangtze river.

Andre Migot was astonished at the sea of richly decorated tents that covered the plain. 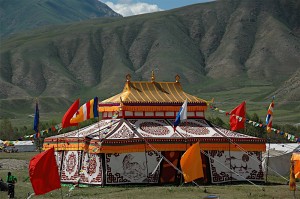 He noted that the tents were spacious and comfortably furnished with rugs, ottomans, low tables and even family altars, and that there were also attached kitchen tents which had everything necessary to prepare a feast.

“Nowhere in the world can a public holiday produce a more remarkable spectacle.”

Note:  Check out Michael Palin’s travel documentary, HIMALAYA (BBC) on disc 2 program 4, for wonderful scenes on nomadic life and the Horse Festival at Kyigudo. You can rent it from Netflix. Also Check out www.rangzen.net for a photo essay on the “Horsemen of Kyigu”. 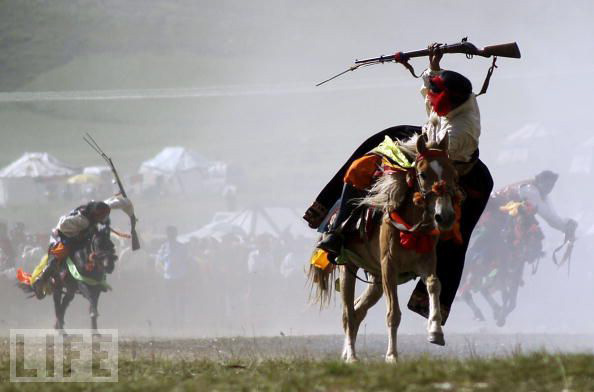