You would think that the first requirement in reporting a natural disaster would be getting the name of the geographical location right, especially in the case of an earthquake, which unlike unlike a messy flood or a roving tornado, has an identifiable epicenter.

The initial reports in the New York Times, BBC, and CNN on the recent earthquake at Kyigudo mentioned that it happened in “… a remote area of Western China.” Only later, and especially when Tibetan monks in their distinctive wine-red robes appeared in their many hundreds for rescue and relief work, was the fact of the town’s Tibetan name and the region’s Tibetan identity revealed. This widespread amnesia regarding most things Tibetan is, of course, the result of China’s long-standing strategy of renaming and re-designating (in pinyin spelling) Tibetan villages, towns, settlements, areas and geographical landmarks – sometimes even re-situating them, administratively and cartographically, with the long-term intention of eradicating the special historical and cultural identities of all Tibetan areas, and making it appear that  they had been part of China all along – or that they were just uninhabited wilderness that China was now opening up for development.

The devastating earthquake of 2008 also received this amnesia treatment, nearly always being referred to as the Great Sichuan Earthquake, even by some Tibetans [1]. The Chinese city of Dujiangyan in Sichuan understandably got most of the media attention in China and the West because it was hardest hit in terms of human lives lost. But it should be noted that sub-standard construction (especially of school buildings) was one of the main reasons for the staggering victim count, and not just the destructive power of the quake itself, which was more intense in Tibetan areas to the west.

In fact the epicenter of the earthquake was in the Tibetan area of Lungu (Ch. Wenchuan) in the Ngaba  (Ch. Aba) Tibetan Autonomous Prefecture. Many Tibetans also perished in other neighboring earthquake-affected Tibetan areas, including Rongtrak (or Tenpa, Ch. Danba) County in Kandze (Ch. Ganzi) Prefecture and Drugchu (Ch. Zhouqu) County in Kanlho (Ch. Gannan) Tibetan Autonomous Prefecture in Gansu province. Then of course there is the area of Wolung in Ngaba itself where the Chinese have set up their Panda Reserve, which was greatly affected by the earthquake. The people of Wolung are Tibetans and, that is one reason, I explain to my children, why the clumsy, slow-breeding, and essentially defenseless Panda, has managed to survive till now, while nearly every other kind of wildlife (no matter how swift, stealthy, cunning or ferocious) in China proper have long disappeared into the exotic meat-markets of Guangzhou and elsewhere (see Colin Thubron, Behind the Wall pgs 182-186 & 190-192).

The Ngaba Autonomous Prefecture  and the areas south of it, which now come under Kandze Autonomous Prefecture was, before this divide-and-rule gerrymandering by the PRC, the Tibetan region of Gyalrong with its own unique history and culture. The great scholar Samten Karmay notes that the name of this region in Tibetan is spelled as rGyal rong which is derived from its full name rGyal mo tsha ba rong. It is related to the name of the river rGyalmo dngul chu (The Queen’s Silver Stream) which is the main river in the region.  Although now absorbed into Sichuan province this whole region is geographically cut off from the actual Sichuan basin by the watershed of the massive mountain ranges. Samten-la tell us “In Tibetan geographical vocabulary the region is described as rong or ‘gorge’. It is one of the four great gorges, rong chen bzhi, of Tibet. They are : Kongpo-rong, Atag-rong, Tsawa-rong and Gyalmo-rong.”[2] Samten-la also mentions a dispute as to whether Gyalrong is a part of Kham or Amdo.

After the earthquake I sat down to write an hommage of sorts to the people of Gyalrong, but the March Uprising and everything else that followed, the crackdown, the Beijing Olympics, sidetracked me. The fact that I knew little about this part of Tibet, didn’t help. Then a couple of weeks ago I came across a brief account I had written on Gyalrong in 1998, that I had completely forgotten about [3]. I reproduce it here with some additional information. The piece is not very illuminating on Gyarong culture, people or even history, and is just a summary account of one war in that region. But what a war. One might even call it a Tibetan Thermopylae, noting the fact that the rest of Greece was not doing very much when Sparta was facing the Persian invasion. But if we take into account the unique religio-political factors and the importance of stone fortifications and engineering skill to the defenders, then the Gyalrong war is perhaps more comparable to the heroic defense of Malta in 1565 by the Knights of St. John against the overwhelming military might of the Ottoman Empire.

In the 18th century, when Manchu power was at its ascendancy in Asia, the Qing imperal army fought two long wars in the Gyalrong region of Eastern Tibet which overshadowed all the other campaigns that were undertaken during the reign of the emperor Qianlong. Though these wars were fought against the two relatively small Tibetan kingdoms of Rabden and Tsanlha, in expense alone (sixty-one million taels[4]) to the Imperial treasury, they far exceeded the costs of the campaign against Burma in late 1760s (nine million taels) and the two campaigns against the Gurkhas from 1788 to 1792 (over three and a half million taels, and where Tibetans did most of the fighting).  Even the conquest of Ili and Zungaria, a war which lasted five years (1755-1760) and involved a territory almost ten times as large as Gyalrong, cost only twenty-three million taels, approximate one-third of the cost of the two Gyalrong wars.[5] Besides the tenacity, military skills, and fierce spirit of the Tibetans of Gyalrong, the formidable stone towers and forts of the region played a vital role in its effective defense. 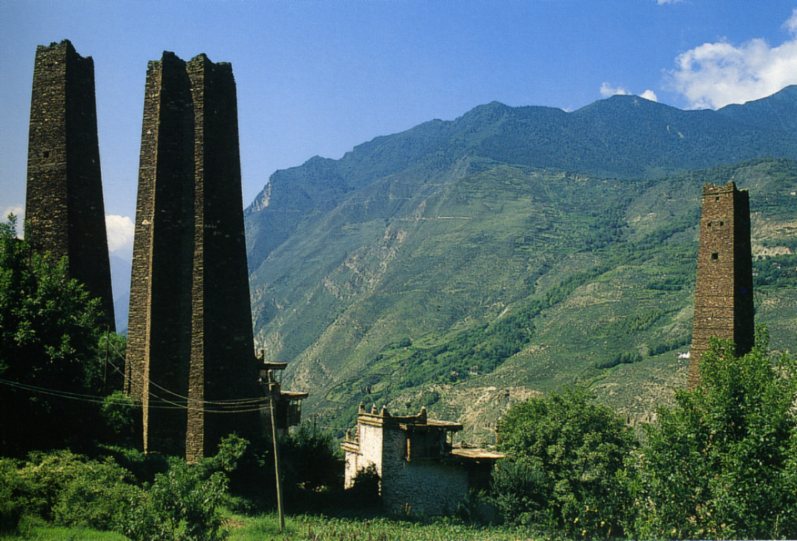 Even in just a photograph of the ruins of these imposing towers one is struck by the sense of power, skill and science that the Gyalrongwas brought to bear in their long struggle against Chinese imperialism. The towers come in different shapes: squares, octagons, hexagons and star-shapes. I read somewhere that these unique configurations gave the structures their strength to even withstand earthquakes. We must also bear in mind that no cement or any sort of mortar was used in the construction, just dry wall techniques, but of a very sophisticated kind. It is impossible not to marvel at the architectural and engineering skill of the Tibetans of the past when one views these ruined towers and, of course, the Potala Palace, the Gyangtse Kumbum and the iron suspension bridges of Thangton Gyalpo.

Lamas and dharma types who assert that there is nothing worthwhile in Tibetan culture besides Buddhism, should, one day, be made to carry the stones to rebuild these towers, as Marpa made Milarepa do to atone for his evil deeds.

According to such scholars as J. Dehergne, Luo Shufu and A.W. Hummel “…the stone forts (of Gyalrong) would perhaps have been impregnable had A-kui, the Manchu General not made use of cannons constructed under the directions of the Portuguese, Felix da Rocha”. A Portuguese Jesuit missionary, da Rocha (1713-1781) was in the permanent employ of the Imperial court. “He not only directed the construction of the cannons to be used (perhaps designed for ease of transport in this rugged terrain JN), but he served as “surveyor” as well, when they were actually in use, arriving at the front late in 1774 in time for the main assault on the Great Gold Stream,” (Da Jinchuan, the Chinese name for Rabden). [6]

In Lhasa, the Ganden Phodrang government, far from regarding the Manchu attack as foreign aggression against a kindred Tibetan realm, saw this as an opportunity to defeat an old religious rival – Gyalrong being one of the last strongholds of the Bon faith. Changkya Hutoktu Rolpae Dorjee, the Gelukpa lama in Peking who was the religious advisor to the Manchu Emperor, undertook a special Buddhist “magico-religious” rite for the defeat and destruction of the Bonpos of Gyalrong and for the victory of the “emanation of Manjushri”, the Manchu emperor. In 1775 the last great fort of the king of Rabden fell to Jesuit cannons and, presumably, Gelukpa magic.  In the same year the imperial army destroyed the Yundrung Lhateng, the great Bon monastery of the Rabden Royal House. A new Gelukpa monastery was built at the site.

The two Gyalrong military expeditions were such a significant drains on the Chinese imperial treasury that China’s national budget would ultimately suffer from depletion over the next fifty years and the Qing dynasty would never again approach the heights of its former imperial power.

(Note: I was told that Gyalrong rose up against the Communist Chinese occupation force in 1956. Any information on this conflict would be much appreciated.)

4.Tael (兩; pinyin: liǎng) was a measure of silver about 40gms. Modern studies suggest that, on purchasing power party basis, one tael of silver was worth about 4130 modern Chinese yuan in the early Tang dynasty and 660.8 in the mid Ming dynasty.

6. Roger Greatrex,  “A Brief Introduction to the First Jinchuan War 1747-1749)”, Tibetan Studies: Proceedings of the 6th Seminar of the International Association for Tibetan Studies, Fagernes 1992. Vol.I The Institute for Comparative Research in Human Culture, Oslo, 1994.