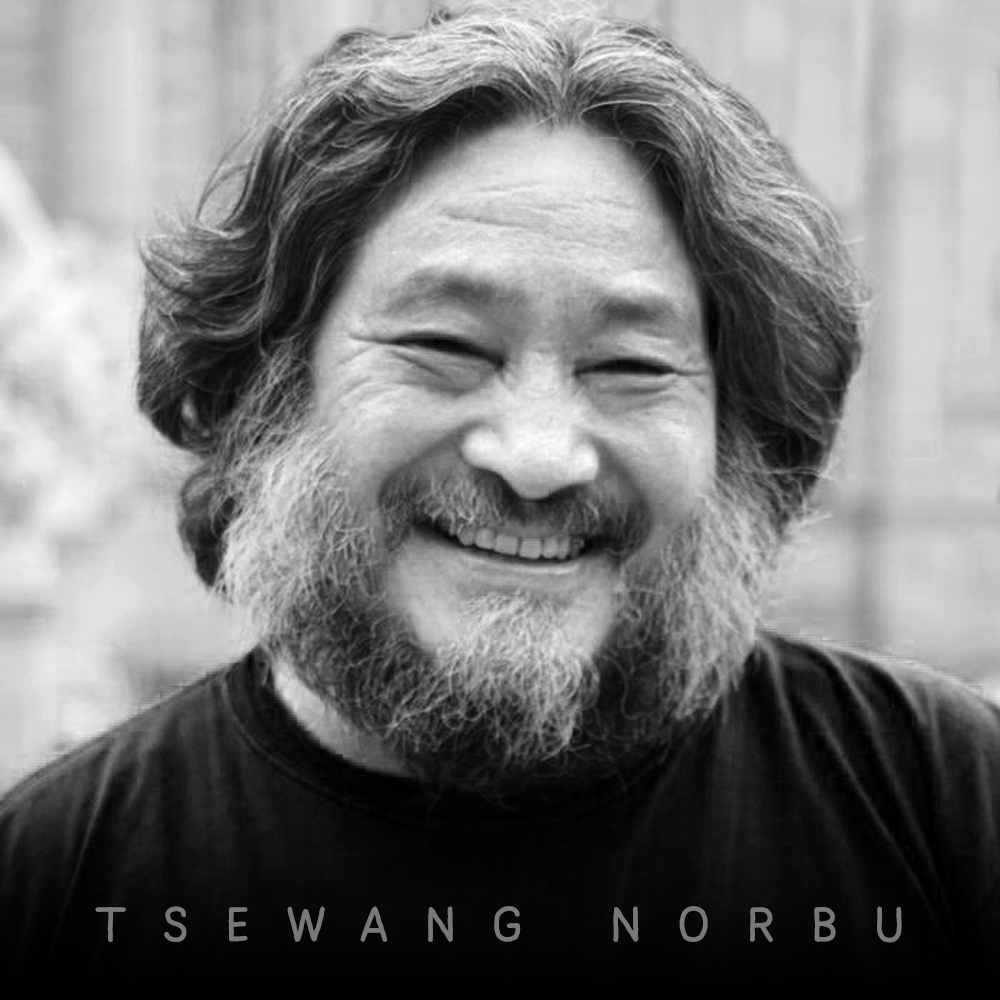 I first met Tsewang Norbu-la at the Frankfurt Book Fair (the world’s largest trade fair for books) in the year 1999 (I think it was) where Tibet Forum had rented a stand to publicize recent publications on Tibet which included Tsering Shakya’s Dragon in the Land of Snows, and my own Mandala of Sherlock Holmes.

Among the friends and supporters gathered at the Tibet Forum stand was this most extraordinary looking Tibetan. He had long shaggy hair that appeared to sprout out of an enormous full beard – and there was no telling where the one ended and the other started. I may have inadvertently looked a little too hard at him when I shook his hand for he asked jokingly “Did you think I was Asahara?” (the Japanese doomsday cult leader). But the profusion of Tsewang-la’s facial hair could not conceal the intelligent twinkle in his eyes and the warmth of his smile. We immediately became good friends.

Another striking element in Tsewang Norbu’s makeup that I absolutely have to mention, was the T-shirt he was wearing, which had a very large image of a prowling tiger in the front. Tigers were his thing, I later discovered. He seemed to have owned a whole wardrobe of assorted Tiger T-shirts. I think I can honestly say that I never saw him wearing anything as boring as a dress shirt or a suit. I have been told on good authority that even when giving testimony or making a presentation before the German Federal Parliament he would wear one of his trademark Tiger T-shirt. German officials and members of the Bundestag, who were all aware of his long-standing role in the Tibetan freedom movement in Germany and his extensive knowledge of the issues, never batted an eyelid at his appearance or showed him any disrespect. The magnificence of his eccentricity simply captivated everyone.

Might Tsewang-la’s Tiger fixation have something to do with his origins? He was born in 1 July 1949 (Earth-Ox year) in the area of Sengge-Ri (Sengge on maps) in Lhodrak, Southern Tibet, very near the border of Bhutan, which (at least in the past) was a land of thick forests and abundant wildlife where leopards and even tigers roamed – all the way east to Kongpo Nyingtri and Zayul. Following the March Uprising of 1959, and the major advance of Chinese Communist troops in the Lhodrak district (in pursuit of the retreating Four River Six Ranges resistance fighters), Tsewang Norbu’s family crossed over the border into Bhutan and then moved to India.

Tsewang-la gained admission in the new Central School for Tibetans at Mussoorie, where he turned out to be a diligent and outstanding student. Perhaps because of his background as someone from Southern Tibet someone gave him the nickname “Tak-go” or “Tiger-head”. A school-friend of his told me that that his nickname was “Tang-go or” horse head”. Be that as it may, what should be noted is that, in 1969, he was in the very first batch of exile Tibetan students to graduate high school, a very proud and seminal moment for the Dalai Lama and the exile government’s noble initiative to provide a modern education to all young exile Tibetans. I recall an idealistic phrase used by officialdom then to describe these graduates “mahong bhod ki sontsa” or “the seeds of a future Tibet”. The phrase was subsequently employed to exhort succeeding generations of students to study diligently for a free and independent Tibet.

Tsewang Norbu finished his high-school in April of 1969 and then joined St. Stephen’s, the premier college in Delhi University, where he completed his B.A. with honors. Subsequently Tsewang la struck up a friendship with an altruistic German dentist who was travelling around Dharamshala and Mussoorie in the 70s, fixing the teeth of Tibetan children and other refugees. Tsewang-la helped this dentist, translating for him besides assisting him in other ways. This dentist subsequently helped Tsewang Norbu travel to Germany in 1973 to pursue his further studies there.

Like young Tibetan exiles everwhere, Tsewang Norbu and the handful of Tibetans in Germany would often meet to discuss what they could do to promote the Tibetan issue. But those were bleak years for the Tibetan cause in the West, with intellectuals and politicians in Europe infatuated with Mao and the Cultural Revolution. But following the death of Mao, the partial opening up of China and Tibet, and in particular with the outbreak of the pro-independence uprisings in Tibet from 1987 through 1989, there was a dramatic and welcome shift in the West’s understanding of the Tibetan tragedy and its support for the Freedom Struggle.

Fortunately, during this crucial period Tsewang Norbu had managed to get a job at the Bundestag (Federal Parliament), specifically in the office of the late Petra Kelly, founder and the leader of the German Green Party, and an indomitable Tibet supporter. Tsewang la working with Tibetan volunteers in Germany as Tawu Lobsang Palden (also some young exiles from Switzerland), and with the support of the Green Party managed to organize the first International Tibet Hearings. I am not that well grounded about events in Europe during this period, so I request better informed readers to post their memories or anecdotes in the comment section.

The website of the Tibet Initiative Deutschland posted a memorial on 19th August “TSEWANG NORBU – FOUNDING MEMBER AND ADVISORY BOARD MEMBER OF TIBET INITIATIVE GERMANY – PASSED AWAY” which leaves no doubt as to Tsewang-la’s indispensable and leading role in the success of the Tibet movement in Germany during that critical decade. An excerpt:

“Tsewang is irreplaceable. He was not only the heart of our organization but of the Tibet movement in Germany and beyond. He dedicated his whole life to Tibet. Like no one else, he put all his heart and energy into the Tibetan freedom movement – against all odds. He was a selfless human being of unique integrity. Whenever Tibet needed him, he was there. Until the last minute, he pushed the Tibet movement forward. He was a guiding light of the exile community. Tsewang was a pioneer. In the late 1980s, he made sure Tibet was put on the agenda of the German government for the first time. He achieved countless milestones for the Tibet movement in Germany. Without him, we would not even exist.”

With the undermining of the Tibetan struggle from the end of the last millenium, Tsewang Norbu, like many committed Rangzen warriors,  now looked around for other ways to keep the Tibetan issue alive. He kept up his work with the Tibet Initiative, organizing protests and actions in Germany, but he also began looking for ways to extend his service to the broader exile community and even to Tibetans inside occupied Tibet.

He chose journalism. He volunteered to be a correspondent for Radio Free Asia (Tibet Section), covering all Tibet related events in Europe. His colleague at RFA, Karma Zurkhang recalls the “… extensive coverage of news and events that Tsewang la regularly provided without seeking additional compensation. We have, of course, lost a veteran self-made journalist whose husky voice will be missed by RFA’s regular listeners, and filling his shoes will remain a challenge, to say the least.”

Since the Tibet Uprising of 2008 Tsewang Norbu also began to write articles and opinion pieces in English which appeared in Rangzen.net  and also on my blog site. He was tireless and outspoken in arguing the case for Tibetan independence, and in one of his more substantial pieces he undertook a complete and definitive translation of the “13th Dalai Lama’s Declaration of Independence”. When the Tibetan exile government convened the now infamous “Special November Meeting” at the end of 2008 Tsewang-la wrote this compelling essay “Put Rangzen Back on the Agenda – An appeal to the Delegates of the Special November Meeting” which in the prevailing sellout climate in Dharamshala then, fell, invariably, on deaf ears.

He was in Washington DC and New York City this January. I don’t know why, but somehow I never got around to meeting him. I could kick myself for not having made more of an effort to book that air-ticket.  Now Tsewang-la has been taken away by a tragic accident and Tibet has one less Rangzen warrior to fight for its liberation. I have one less friend and comrade.

Tsewang Norbu-la is survived by his wife Ingrid, four sisters, nieces and nephews.

4 Replies to “The First “Seed of a Future Tibet””