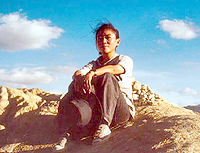 Woeser was born in 1966 in Lhasa, at the outset of the Cultural Revolution. Her father was a soldier in the People’s Liberation Army and she appears to have been educated entirely in Chinese and never learned to read or write Tibetan. Ironically it could be this shortcoming that has enabled her to be such an influential voice, since her writing is appreciated not only by Tibetans au fait with Chinese but also by a wider Chinese readership. She is said to be the first Tibetan to have played the role of a public intellectual in China, especially at a time when whatever free expression there is in China survives largely on the internet.

I have been told she is half-Chinese, but I haven’t seen any reference to this in biographical notes or descriptions of her. She has written a poem “Of Mixed Race” so there is probably no need for us to be overly sensitive about the fact. As a child of mixed marriage she can claim a place in a fraternity of Tibetans of half Indian, Canadian, Japanese, Swiss, German, French, African, American, English and Irish descent who call themselves “T-Plus”, many of whom are proud and committed activists for the cause. Like the X-Men they bring a little something special to our struggle against evil.

Woeser started off as a journalist in Sichuan and then became editor of the Chinese language magazine Tibetan Literature (xizang wenxue) in Lhasa. In 2004 she she was accused of “political errors” in her writings and removed from her position in the Tibet Cultural Association and expelled from her work unit in Lhasa. This meant having all health, retirement and other benefits terminated and being evicted from her home.. Her book Notes on Tibet (xizang biji), a collection of essays relating to Tibet’s history, personalities and way of life, was officially banned. To make things easier on her family in Tibet, she moved to Beijing to live with friends. I can imagine her staring out of a grimy apartment window at the agent-orange sky of this mega-dystopian city, as she wrote this line of a poem in November 2004:

She started her first blog in 2005, setting new standards for frank discussions on issues as AIDS in Tibet, the Tibet railway, The Cultural Revolution in Tibet, and the March 10th Uprising, which are not only highly sensitive but dangerous to think about aloud. Last year two of her blogs Maroon Map (visited largely by Tibetan readers) and Oser’s Blog (visited by Chinese readers) were shut down. They were closed by the websites that hosted them – Tibetcul.net, a Tibetan cultural portal, and Daqi.com, a local blog platform – presumably on government orders amid a continuing wave of online censorship in China. Her website was recently hacked. In the overwrought atmosphere of nationalist fervor in China she probably gets a lot of hate-mail.

The woman is fearless. She gave an interview on the Channel 4 documentary Preparing Tibet For the Olympics and described China’s rule in Tibet as colonialism – which I thought was smart. The word “colonialism” does have the negative connotation of a foreign power conquering and exploiting a separate and distinct country or people, but probably does not raise red flags at the Ministry of Truth in Beijing because of its regular usage in Communist propaganda against Japan and Western nations.

Last year she was awarded the Freedom of Expression Prize 2007, by the Norwegian Authors Union. But she could not travel to Oslo to collect her prize. She has been prohibited from applying for a passport to leave the country.

Woeser’s Tibet Updates provide invaluable detailed information on all that has happened and is happening in Tibet now. Her writing provides a stark immediacy to events and brings them up-close and personal as no report by foreign journalists or “experts” can, not even the scribblings of exile writers like myself. The excerpt below is from Tibet Update 3:

“The human rights situation in Tibetan areas, including Lhasa, is very poor, in Lhasa alone, over 150 Tibetans were killed during March 14 Incident. It is learned that up to now since March 14, when some Tibetans in Lhasa passed away, and their relatives took the corpse of the dead to the Sky Burial site (i.e. the Drigungthil sky burial platform), the wrapped corpses would be open and checked by the military police who set up checkpoints on the way. They were checking to see whether they were victims shot during March 14 Incident. This is the greatest disrespect and an act of profanity toward the deceased.”

In her latest Tibet Update (May 1-2, 2008) Woeser puts forward the “viewpoint of Tibetans in China” regarding the the talks in Beijing with the Dalai Lama’s envoys: “The CCP wants to use the Dalai Lama to quiet down the Tibet issue, the various domestic problems and the threat to Beijing Olympics posed by the international society … The Sino-Tibetan talk at present is completely tendentious. It is an effort to satisfy the pressure from the western society and to brag about itself. The Dalai Lama hopes to discuss and explain protests in Tibet since March, but the Chinese Communist Party already proclaimed their verdict to the world, thus, it is not likely to have any result from the talk.”

The following observations on the trial of the 30 Tibetan protesters is from Tibet Update 4:

“The trial process was simple. There were no lawyers to defend the defendants; neither were any statements allowed to be made by the defendants. The normal procedure was reduced. Due to the fact that the judge’s speech in Chinese needed to be translated into Tibetan, and many mistakes were made in the translation, those attending the court hearing frequently broke into laughter. It is said that judging from the laughter, it seemed that people were venting their resentment. Otherwise, how could people laugh at such an occasion. But the defendants could only put up with this in silence.”

I liked the observation about the laughter in the courthouse. In her poem “Lhasa Nights” or was it “Secret of Tibet”, Woeser, drinking with her friends “in small bars along the Lingkhor” makes a note of “Lhasawa humour” and the subtle political satire the citizens of the Tibetan capital are capable of. I guess there isn’t much to laugh about in Beijing right now. Even with cellphones and the internet, it must be God awful lonely to be a Tibetan in that ocean of inhumanity.

15 Replies to “The Loneliness of the Long Distance Blogger”