I may be getting paranoid but it seems to me that in most academic discussions and scholarly forums on Tibet, these days, a conscious effort is being made all round to avoid mentioning the word “rangzen”. Sometimes, of course, it happens that the term just has to be used and there is no judicious way of sidestepping it. Fallout appears to be contained, in such a contingency, by the use of a qualifier like “controversial”; which allows for the implication that China’s claim to Tibet (no matter how intellectually outrageous) is, in this instance, being regarded as having equal merit as the historical truth of Tibet’s sovereign status before 1950.

So when an eminent academic as Professor Elliot Sperling of Indiana University, makes liberal uses the problematic “R” word (without any qualifiers) throughout his address at a Tibetan Studies conference in Delhi I thought it noteworthy enough to reproduce on this site. His Holiness the Dalai Lama also graced this event. It is encouraging to hear that a considerable number of Tibetan students from Delhi University and the SOS Youth Hostel attended this conference. JN
.
ADDRESS BY PROFESSOR ELLIOT SPERLING AT THE INTERNATIONAL CONFERENCE ON EXPLORING TIBET’S HISTORY AND CULTURE IN DELHI 19-21 NOVEMBER 2009. 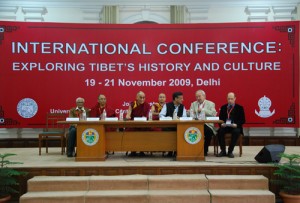 There are many topics that we have covered over the last three days. The geographical reach of Tibet’s interactions with near neighbors and far neighbors that we have discussed has been considerable; the subjects which this group has discussed are equally amazing, especially for a nation long considered isolated and a culture that is termed (and it’s a term to which some even in the exile Tibetan leadership don’t object) an ethnic rather than a national culture.

I I won’t go into a summary or list of the papers heard in the history section of the conference, but I would like to make some general observations about them as a whole. Over the course of this conference we have seen and heard presentations and papers that cover the expanse of the Tibetan cultural world most obviously Indo-Tibetan interactions and ties beyond the Himalayas—including, of course, Sikkim as well as Ladakh and the other Himalayan areas across the Tibetan border. Tibet’s historical relations with China—not simply political but also social and economic—have been discussed very profitably here. Some papers have examined Tibet’s place in the larger world of 19th and 20th century power politics, while a number of papers have underlined Tibet’s role in the history of Mongolia and the Mongols, from the time of Sečen Qubilai right through the conclusion of the Tibeto-Mongol Treaty. Indeed, the number of papers that have cast light on an array of intimate links, religious and political, that created a space we might term the Tibeto-Mongol world of the 17th-18th centuries and beyond is striking. But it doesn’t stop there, for that world also had a niche for the Manchu rulers who established the Qing Empire.

We have heard new findings and new interpretations that have made of this conference a wonderful example of all that is typical of Tibetan Studies today. In the History Section we have had contributions on history as it relates to politics, the interaction of religion and politics, bureaucracy, archeology and more. How to weigh the value of all this? Well we’ve also had a distinguished paper on Tibetan weights and measures.

In all this, the expanding world of accessible Tibetan sources has been shown to be crucial. The expression of Tibetans in the past and today, committed to books and paper or declared orally is the core of what we do. Without the ability to work in Tibetan there is no serious Tibetan Studies. This was grasped in India even before the time of Sarat Chandra Das and it remains true today. This seminar has made it obvious. I would like to therefore congratulate our hosts, the University of Delhi and the Central University of Tibetan Studies for bringing this out via our conference.

As the range of work in the History Section also demonstrates, Tibetan Studies is not simply Buddhist Studies. This is not to denigrate the study of Buddhism or its place in what we do. But one doesn’t need to be a Buddhologist to be drawn passionately to Tibetan Studies. Tibet and Tibetans have evolved traditions in the sciences, the arts and in scholarship that are approachable in the way that those of other nations and peoples are approachable, as we have seen here.

I am gratified to see young Tibetans here, either as students, observers, or staff. Most of what I have to say from this point on is really directed at you. All that I’ve said about Tibetan scholarship and the necessity of grasping Tibetan sources relates to your heritage. Passionate as non-Tibetan scholars might be about Tibetan Studies, this is not our patrimony. It is yours: you can embrace the legacy that great Tibetan scholars and historians have committed to books—in Tibetan—and by reading them let them speak directly to you and tell you things about Tibet that you won’t get from the ready-made English-language materials that come out of the Tibet-support movement. It is for your generation to grasp the wealth of your inheritance or to let it rot. Tibet is assuredly a nation; Tibetans are assuredly a people. They are situated among other nations and peoples and have interacted with them as nations and peoples do. Tibet is not some “world soul,” save for those who have the leisure to fantasize along such lines

The modern question of Tibet looms over what we have done here. That’s a fact of life. Speaking from the standpoint of the History Section, I cannot but note that one—and not only one—of the battlegrounds of the Tibet Issue is history. Most recently in China, since 2008, we have seen the circulation of a revised interpretation of Tibet’s status: no longer a part of China since the Mongol era, Tibet has now been part of China “since human activity began,” and the imperial dynasty of the Lha btsan-po is now a Chinese Dynasty, coexisting within China next to the Tang as the Liao and Jin Dynasties coexisted in China next to the Song.

I try to deal with facts: there are not just narratives, there are facts, though dealing with and understanding them is work that is without end. And so a few people here have come to me and asked that I speak here about Rangzen. Well do I—and I speak now for myself and not for anyone else in this room—think that Tibet was historically independent of China? Of course; I’m well on record about that. Do I think that therefore the current situation of Tibetan subjugation to China is an insult to that history? The answer is the same. Moreover I perceive that the path that Tibet’s exile authorities have laid out as practical and realistic is now exposed as impractical and unrealistic. And so I’ve been asked to speak for Rangzen. Me? What about you, especially those of you who sit alongside authority. It is for you to speak, inside and outside the councils of power, with no difference between what’s in the heart and what’s on the tongue—and not simply to say lags legs-so to this bureaucrat and skyabs-su-mchi to that lama. Or worse: to think, “gather all these scholars, have them say things that directly or indirectly support Rangzen so as to cynically say ‘look at how conciliatory, practical and realistic we are, rendering irrelevant what scholars have shown to be the case.’” I certainly object to my work being used as a bargaining chip by those inclined to do so. Here or elsewhere.

There’s a seamless web of sems-shugs here and it goes back to my remarks about the need for you to grasp that rich legacy that lies between the countless covers of countless dpe-cha that will speak to you directly, across centuries if you’ll open them. Your cultural legacy and your national legacy are for you to pick up or to let go. If it’s the latter, then at least please don’t lament anyone else’s lack of support for Tibet.

I would like at this point to say a few words of thanks. There are too many people on staff for me to thank individually—their work has been spectacular and they’ve taken excellent care of us. And there will be a vote of thanks upon which I don’t want to intrude. But I’d like to mention Profs. Deepak Pental and Ngawang Samten of the University of Delhi and the Central University of Tibetan Studies respectively, for the cooperative venture that produced this stimulating and productive conference. We are all in your debt for this marvelous gathering. And I feel a need to thank the person who became the public “e-mail face” of the conference, Dolma. And finally an old friend of many of us, Prof. Jampa Samten, who in addition to his duties and research in Sarnath, took on so much of the work of the conference. It was a pleasure to be welcomed to Delhi by Jampa and I hope he feels his work was successful. I certainly do.

(The remarks that follow were delivered by Elliot Sperling as a scheduled “delegation observation” at the concluding session of the recent conference “Exploring Tibet’s History and Culture,” held at the University of Delhi. They were presented on the afternoon of November 21, 2009 before an audience that included conference participants and a number of observers; on the dais at the time were His Holiness the Dalai Lama, Prof. Deepak Pental of the University of Delhi and Prof. Ngawang Samten of the Central University of Tibetan Studies (Sarnath). Since these comments subsequently became a subject of discussion in and of themselves they are presented here in full.)