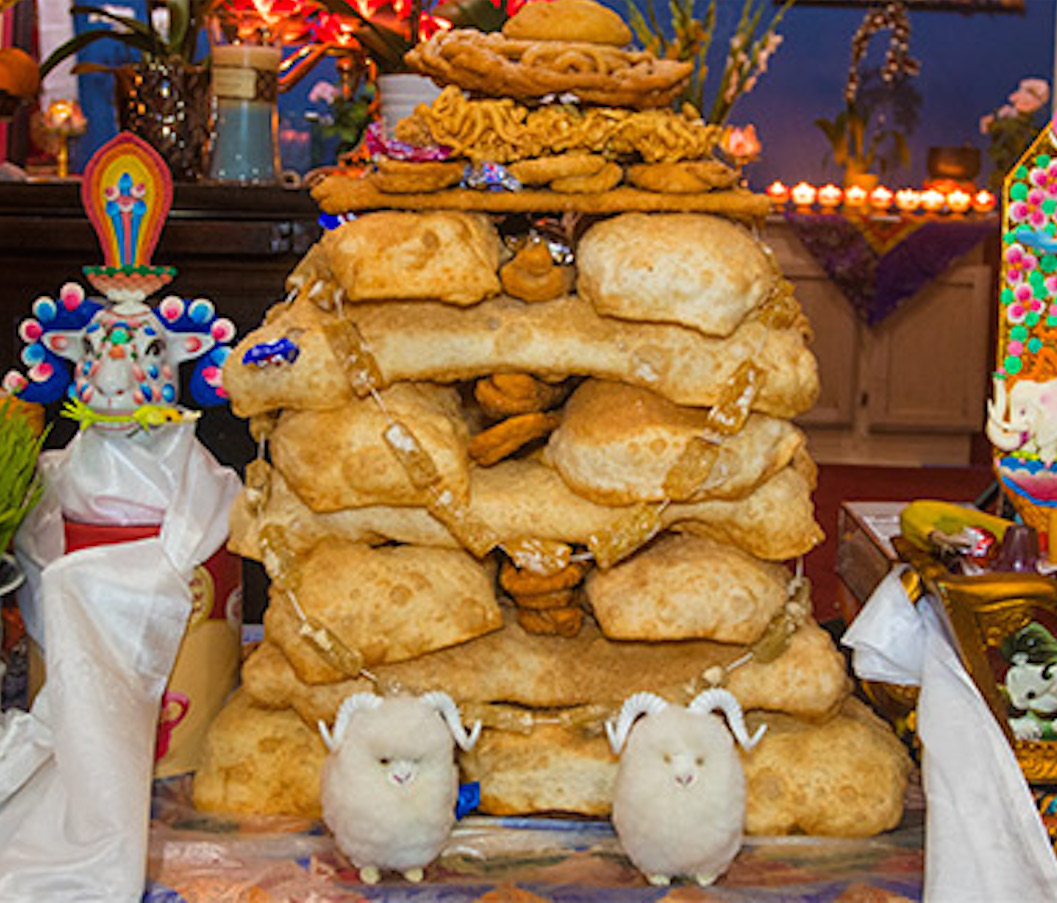 (Most Tibetans, it seems, want to celebrate Losar this year. I agree that a modest observance of our most important cultural holiday would not come amiss right now, no matter how grim our current situation may be and how paralyzingly depressing it is to see, once again, our officials rushing to Beijing to ingratiate themselves with some supercilious functionaries of the United Front. I definitely want a drink right now, and a few more on Losar day. Moreover, all the brave freedom fighters in Tibet and the resolute activists outside need some R & R for the struggle that is to come. My contribution to the reader’s Losar enjoyment are some bits of writing that will hopefully take their mind of our immediate political problems, but be appropriate to the spirit of the season. This first piece appeared in the Tibetan language paper MANGTSO on 15 February 1994. It also came out some years later, in English, in Phayul.com, under the title “The Story of the Losar Khapsay”. The photograph is from philipmarshall.net. The ink sketches are by a young Amdowa artist at MANGTSO whose name I have regretfully forgotten.)

A CONNOISSEUR’S GUIDE TO THE PREPARATION, DISPLAY AND APPRECIATION OF THE LOSAR KHAPSAY

The Losar cookie the khapsay, (Literally “mouth-eat” or “kha-ze”) is an absolute requirement for the proper celebration of the Tibetan New Year. Khapsays are made for other formal celebrations like marriages, the enthronement of a lama and so on, but the New Year is when the khapsay comes into its own.

Probably the most well known khapsay is the bhungue amcho (Donkey Ears) as it is called by most Tibetans-in-exile, but which should properly be called the khugo. Older Lhasaens get annoyed by this crude description of the standard Losar khapsay. The khugo which looks like a large telephone handset, or, oh, all right, like a donkey’s ear, is a Lhasa specialty and probably spread to other parts of Tibet around the end of the nineteenth century.

The oldest variety of khapsay is almost certainly the mukdung, which is the length and thickness of a man’s forearm, and made from four long strands of dough braided together and deep-fried in butter. All Tibetan government derga, or khapsay display arrangements use the mukdung not the khugo as the standard building block for their derga.

The Tibetan government would in the old days have tens of thousands of mukdungs fried and then stacked in gigantic derga displays fifteen to twenty feet tall, at the Tsomchen hall in the Potala Palace. On the second day of the official New Year festival, at the conclusion of the official ceremony (zego) the spectators would charge into the hall and grab as many khapsays as they could. The confusion and chaos can only be imagined.

Some major monasteries used the mukdung as their standard khapsay and they were also distributed to the monks. There is a funny story about a Mongol monk from Drepung, (Hamdong khamtsen college), trying to describe (in broken Tibetan) to his sponsor, a pious Lhasa amala, the big mukdung he wanted to give her and her daughter, but it is probably too obscene to be repeated here in full.

There are a number of different types of khapsays that go into the construction of a regulation derga display for the home. Of course the basic khapsay used is the khugo, of which at least a minimum of eight pieces are necessary for an adequate derga display. There is also a little controversy about which way the khugo should be laid. The practice in exile, also in the Bhutia (old Tibetan) community in Darjeeling and Kalimpong, and among the Sikkimese, is to have the hollow part of the khugo facing up, so that sweets, dried fruits, sweet cheese and so on, can be filled into it. But the proper Lhasa way is to have the hollow side down, otherwise it is temday lokpa or inauspicious. Whichever way the khugo is laid out, the practice of having a khapsay display on Losar is now widespread in the entire Tibetan cultural world from Tawang, Bhutan, Solokhumbu, and Mustang to Ladakh.

Other varieties of khapsays are required for the proper derga and I will go into them one by one. It is important to note that the first khapsay to be fried is not used in the derga. This is a single cookie shaped like a scorpion that is fried before anything else. It is not for eating and must be hung up somewhere in the kitchen till the 15th day of the New Year. It is there to ward off bad luck and possible accidents that could take place during the khapsay-making. As large pans of very hot oil are used in the operations, burns and injuries are not uncommon. The scorpion is a fairly common symbol in pre-Buddhist magical practices and old Tibetan kitchens often have a scorpion drawn with chalk on the wall.

A smaller version of the mukdung is also used for household derga displays (one layer above the khugo).

Other khapsays are the kongchen, which probably originated in Kongbo in Southern Tibet. It is a narrow rectangular piece of dough with a cut in the middle through which one side of the khapsay has been pulled through and is deep-fried in butter or in mustard oil (though corn oil is now used in exile). The narrow rectangle can also be a diagonal.

The nyapsha (split fish) or nyashok (fish wing?) is made of dough rolled out like a length of rope, coiled flat and then stretched out.

The bulug is a flat circular khapsay made up of crisp strands of deep-fried batter, and looks like a larger version of the Indian jelabi (before it’s been dipped in syrup).  Actually more than anything else the bulug resembles the Funnel Cake, a  popular regional food at North American carnivals and fairs. The Funnel Cake is even dusted with powdered sugar just like the bulug.

One strange khapsay, fried last of all, is called the pimbi-tok-tok (or pindo) which looks exactly like an igloo with an Eskimo who’s crawled half-way into it.

This piece is used to crown the whole derga display. The last khapsays to be fried are generally called hrug-hrug (or small pieces) and are small squares, triangles etc., that are generally more convenient for serving. One khapsay, sometimes called the tzegma, or ribcage and which looks like one, is often included in the derga, although some say that it is of Chinese origin.

In Amdo they fry a very different kind of khapsay which Amdowa call sog-sog, but which in the Sining patois is known as senz. These are long thin strands of dough wrapped together and twisted.

In Mustang (Lo Menthang) the people have a flat round fried bread (with two slits cut in the centre) for Losar that is known in Central Tibet as the taygor. Another version of the taygor which uses sour-dough is the yushang bhaglep, whose origins are probably Chinese.

A cookie of Newari origin, but baked very differently in Lhasa, is the sanga-bhaglep, or literally, “the bread costing one srang” (the old Tibetan currency). This is strictly speaking not a New Year cookie, but is often used as such in exile. When I was the director of the Tibetan Institute of Performing Arts, our chef, Sonam Wangdu la, would bake them for distribution to TIPA members and for presentation to the ministers of the Kashag and members of Parliament, as a New Year gift from our Institute (I was lobbying to get more government funds for TIPA)

All these khapsays not only looked different but had their own unique flavours. The khapsay I am fond of is the standard khugo which is plain dough flavoured with a little salt and deep fried in mustard oil. It has a subtle flavor, which in no small part is created by its shape and the method of frying. Other khapsays like the kongchen and nyapsha have shortening (sol) and sugar in the recipe, and are sometimes deep-fried in butter. The recipe for bulug also requires sugar and a lot of milk so that the batter is runny and is squeezed out of a contraption like a cake-icing bag, into a deep pan of very hot oil. After cooling the bulug is usually dusted with powdered sugar. The Amdowa senz or sog-sog is even flavoured with a little Sechuan pepper (the numbing kind). Red, green and blue food colors are sometimes used for the lesser khapsays like the nyapsha and hrug-hrug. More conservative Lhasa types disapprove of the practice as it is (of course) Chinese, and is often found in khapsays made in Amdo and Kham. In exile the practice is fairly widespread but the dubious food colors sold on the Indian (and Chinese market) do not recommend it.

Khapsay making is a fairly complicated process that usually requires a specialist. Home made kapsays generally taste fine but the shapes don’t seem to always come out right. Large families and institutions often hire a khapsay chef for the job and he comes armed with the tools of his trade, which are: a flat metal basket with a bamboo handle, a long stick with a Y shaped end, a long handled ladle, and a WWI (or WWII) surplus aviator-goggles to protect his eyes from oil-fumes and spatters. He also brings his own dough kneading and rolling boards, one of which is scored with many lines, and which gives the khapsay a distinctive striped pattern. Pawo Thupten Ngudup who immolated himself on April 27th 1998 was a fine cook, and he would pad out his small military pension by making khapsays for Losar.

The Chinese also make a kind of khapsay called youtiao (fried dough-sticks) that they eat with rice porridge for breakfast. But I disagree with some who say that our khapsay tradition may have come from China. Having a special kind of bread or cookie to celebrate the New Year or a major festival is widespread throughout the world. The Chinese have their moon cake (yuebing), the Japanese their special rice cake (mochi) which is pounded out in a large wooden mortar, the English their Christmas-cake and plum-pudding, the Nepalese their “jackal bread” syal-roti for the Dasai festival, the Indians their jelabi for Dushera, the Jews their unleavened flat bread (matzoh) for Passover, and so on.

One thing that distinguishes the Tibetan khapsay tradition is the enormous quantity of the stuff that has to be made. Not only are complete dergas required for each room of the house but khapsays are often sent around to friends, and for distribution to members of the household including servants. Large quantities are also needed to be given to the Dre-kar (“proclaimer of good wishes”) the special New Year beggar, and other indigents who will drop by your home on New Years day.

Of course one can’t even begin to eat all those khapsays during the Losar festivities. Long after Losar, maybe even during early summer, khapsays are often served at tea-time, where they make a nice snack. Injis can have their pastries and Indians their methais. For me there’s nothing quite like a piece of khugo that’s been dipped in butter-tea or even sweet tea. Many older Tibetans hold that only long after Losar does a khapsay begin to acquire its true flavour.