I met my old friend Sonam Topgyal la last summer – June 25th to be exact. He was in a bad way. Definitely cancer. I suspected  stomach cancer of a kind, but could not bring myself to ask. He was weak from his last chemotherapy, but seemed glad to see me. As always we talked about Tibet and the independence struggle. I told him about the Rangzen Roundtable we had organized in New York City earlier that year (11-12 March) where patriotic Tibetans and friends from USA, Canada, Switzerland, Germany, Japan and India had gathered and committed themselves to starting a new political movement, the Tibetan National Congress (TNC) or Bhod Gyalyong Rangzen Lhentsok. I explained that one of the reasons I was in Dharamshala was to participate in another such Rangzen Meeting where we hoped the TNC South Asia could be established. I asked him if he could attend the meeting. He replied that there was not much he could contribute in his present physical state, but that he would attend if it helped the cause in any way.

The meeting was held on 27th June 2012, at the new hall of the Library of Tibetan Works and Archives at Gangkyi. It was attended by more than fifty participants, among them ten members of the Tibetan Parliament-in-Exile, scholars, writers, researchers, activists, a doctor, veteran Rangzen activist Lhasang Tsering la, former speaker Karma Chophel la, Rangzen activist Shingza Rimpoche and leading figures from the Tibetan Youth Congress (TYC) and Students for a Free Tibet (SFT). When Sonam Topgyal la spoke he emphasized the urgent need to revive the struggle for Tibetan independence. He said “I have never been a Rangzen activist like many gathered here, but I have always been a person who has cherished Rangzen. I don’t have anything special to say here, all I can say is that we must revive the national aspiration for Tibetan independence.” He was very weak and had to leave the meeting after the morning session. I accompanied him to a waiting car. Before he left I inducted him into the membership of the TNC and pinned the symbol of the Tibetan National Congress “the Flaming Sword of Manjusri”* on his shirt. I never saw him again.

I first met him in 1969 at McLeod Ganj – March 5th, if my memory serves me. I had been working the last year at Mundgod for the Swiss Technical Corporation as foreman for the settlement’s tractors, but was requested to come to Dharamshala to help with the new magazine Sheja (Knowledge) published by Tenzin Tethong, Tenzin Gyeche la and Sonam Topgyal la, who served as the chief editor. It was an exciting and novel publication. It not only printed news-reports of current events but also general-knowledge information about science, history and brief bio’s of “great men and women”. It was a conscious attempt to bring about the modernization of Tibetan society and was tremendously popular with the Tibetan public. At that time the memory of our defeat was fresh in the mind of all Tibetans, and there was, even among hardliners on the “religious right”, a conviction that we absolutely had to democratize and modernize our society if we were to survive as a nation. I mentioned this before in some earlier articles comparing the intellectual/ political atmosphere in exile society to that of turn of the century (20th) China with its praise of  “Mr Democracy and Mr. Science” (de xiansheng sai xiansheng) that the revolutionary, Chen Duxiu, insisted “were the only two gentlemen who can save China from the political, moral, academic, and intellectual darkness in which it finds itself’.”

For a long time the magazine was mimeographed or cyclostyled (Tib: num-par) with an old calligrapher laboriously hand-cutting the text on a paper stencil, and the “printer” Namgyal Wangdu la turning the crank handle of the Gestetner machine. It was admittedly primitive, but it didn’t matter. Tenzin Tethong produced brilliant artwork, cartoons and maps to accompany the articles written in Topgyal la’s elegant but clear and straightforward Tibetan.

I didn’t stay long at Sheja. TIPA or the the Tibetan Drama Party as it was called then, was going through an existential crisis and I was asked to work on its reorganization. But that is another story. Once a month (or fortnight?) most of us young volunteers or indrungs (English officials) as we were called, would gather at the Sheja office to help staple, pack and post the latest issue. The management would treated all us all to tea and kogun bhaley, but the the real reward was the conversation and jokes, that continued late into the evening.

The next year with the formation of the the Tibetan Youth Congress, I was thrown together much more with Topgyal la. He was one of the founders with Tenzin Tethong, Lodi Gyari, and Tenzin Gyeche, and I was one of the conveners who helped organize the first Congress. Both Topgyal la and I were elected to the Central Executive Committee with five others, and worked together for many years. Topgyal la was older than the rest of us. He was born in Kham Dagyab in 1941 to the Zachutsang family, though he rarely used that family name. He had been a monk at Drepung and later in exile had studied at Varanasi, where he had mastered Hindi among other subjects. He regularly subscribed to the Hindi newspaper Navbharat Times and the weekly literary/political magazine Dinaman, and kept abreast of world news and the twists and turns of Indian politics. I was glad to have Topgyal la in Centrex. I was the youngest member of Centrex and always got into arguments with the others. Topgyal la didn’t always agree with me, but he went out of his way to make sure I got a fair hearing. He was a moderate in most things, and it was his steady influence that helped keep TYC on an even keel, even during turbulent times. Yet sometimes when called for, Topgyal la could be relied on to make the difficult choice and support a difficult decision.

His staff members at Sheja, and later at the Information Department where he became secretary and later Kalon,  all knew him as a fair-minded and accessible leader. They and everyone else at Ganchen Kyishong also knew him as the most unassuming and unselfconscious official in the administration. His hair was always mussed up and he could never be bothered to comb down the cowlicks. He was also notorious for coming to office with mismatching (one blue one red) socks, and not being bothered about it. Even as a kalon he would find time for a game of cards with the Gangkyi drivers. I don’t know whether he had to give up that past-time when, after a lifetime of service, he finally got to be prime-minister. I suspect not.

But it was not just his honesty and fairness that made him a good leader. He was someone who always listened to people and who managed to assimilate the information in his work. In a community where most politicians are uninformed and unteachable right-wing gasbags of the Herman Cain variety, his was an unusual virtue. Because he listened, patiently and with real interest to all the newcomers from Tibet, he was the most knowledgeable person in Gangkyi circles on everything that was happening inside the country: administration, party structure, personalities and so on. He was also one person who absolutely knew his history and organization of the Chinese Communist Party.

When he eventually became prime-minister I felt that His Holiness would be well served by Topgyal la’s knowledge and loyalty, but also by his frankness and his ability to “speak truth to power”.  Although he served in an administration advocating the Middle Way policy, he  never made any statement accepting China’s rule over Tibet, or praised, in any way, China’s “developments” (eg. the railway) as other prime-minsters began to do after him. As prime-minister Topgyal la never once spoke out against rangzen advocates, and in fact encouraged the TYC, myself and other Rangzen activists in our efforts. He was of the belief that the only way to get China to agree to genuine negotiations was through applying pressure, and that all Rangzen advocates were such a source of pressure. I disagreed with him regarding this, but he did have a point. Eventually after the failures of the negotiations, Topgyal la came out and stated publicly that Tibetan should never give up the goal of independence. He repeated this belief in a number of discussions on RFA in which I participated.  He was a loyal government official but he was also honest and courageous. A few days before he died, a mutual friend of ours went to see him at his house at Sidhbari. Topgyal la told him that he was suffering a great deal of pain, but that he was not afraid to die. He passed away on the 30th of December 2012. 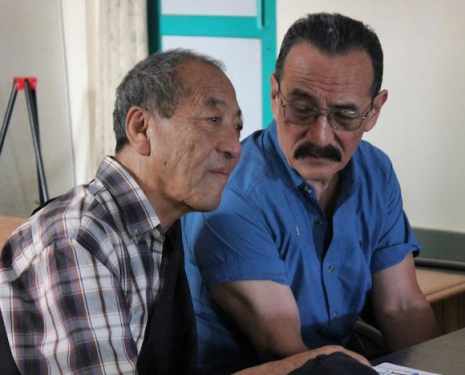 * The flaming sword of Manjushri (Bodhisattva of Transcendent Wisdom) that cuts through the chains of ignorance, apathy and fear – liberating all beings.

16 Replies to “A Most Unassuming Man”