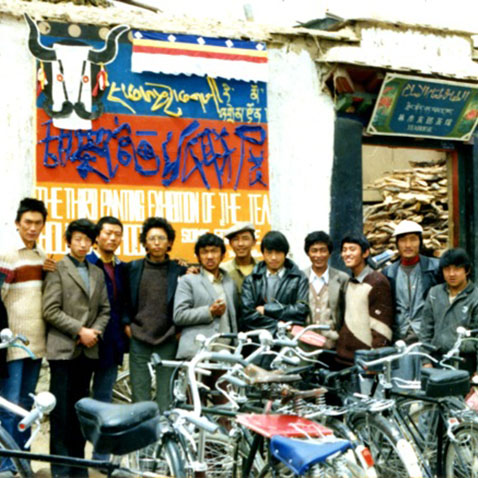 Emerging from the aftershocks, debris and trauma of the Cultural Revolution a loose-knit group of young Lhasa artists in the early and mid-eighties decided to come together to better utilize their individual creativity and to promote their own works. They joking called themselves the Sweet Tea House Movement.

The contemporary art scene in Lhasa was then controlled by a Communist Party cadre and art-teacher, Han Shuli. He was the chairman of the Tibet Fine Arts Association, and vice-chairman of the Literature and Art Association of TAR. He had a strangle-hold on everything to do with art in Tibet, especially in Lhasa. Though Han had moved on from his earlier socialist realist propaganda pieces to pseudo-mystical, exploitively Buddhist themed paintings for the tourist market, he appeared not to have any real sympathy for Tibet or Tibetans. He used his position for personal travel and held two exhibitions in Paris, where he lectured at the Paris Fine Arts School on “My Life and Work in Tibet.”

In 1985, on the occasion of the UN proclaimed International Youth Year (IYY), a nationwide exhibition and competition of art-works was held in Beijing. Five young Lhasa artists prepared a number of their best paintings for the exhibition, but only one painting was selected. Chinese painters in Tibet were allowed to exhibit many more paintings.

Disappointed, the young Tibetan artists decided they had to do something themselves to exhibit and promote their work. So they founded the “ja ngarmo remoi tsokpa”, the “Sweet Tea House Group of Modern Tibetan Painters” that from 1985 held exhibitions of their works in the small Lhasa tea shops where Tibetan youths gathered to meet and talk. These artists felt that by exhibiting their work in a tea-house frequented largely by young Tibetans, they would be contributing to the cultural awareness of the youth of Lhasa. Our young artists were also aware that Monet, Courbet and other French impressionists had gathered at Parisian cafes to discuss their work.

I heard all this from Gongkar Gyatso, a member of the Sweet Tea House Group, and I am glad to say I was able to contribute a little supporting anecdote to the chronicle of this legendary group by letting Gyatso know that in 1888, when the paintings of Paul Gauguin were excluded from the official art section of the Universal Exposition in Paris, Gauguin just went ahead and organized his own exhibition at a nearby cafe. Gyatso seemed pleased that this cafe exhibition had been a big success.

The Sweet Tea House group disbanded in 1987 when, after a successful exhibition covered by Lhasa radio and television and attended by TAR dignitaries, the artists were badgered by the authorities to accept official sponsorship, and to allow party-approved Chinese painters into the group. Gyatso also told me that the group split up as a few of the artists wanted to move on and do new things. Some stayed behind in Lhasa and later formed the successful Gedun Chophel Artist’s Guild. Gongkar Gyatso decided to escape from Tibet and made the long journey to Dharamshala where I ran into him.

He told me he had hoped to find a “Yan’an” of exile Tibetans in Dharamshala, the kind of redoubt that the Communists under Mao had created in northern Shaanxi, to hold out against the Guomindang and Japanese armies. He was, of course, dissapointed. But my colleagues and I at the Amnye Machen Institute (AMI) cheered him up a bit by putting together a public exhibition of his paintings, the first ever in exile of a contemporary Tibetan artist. I remember it was on His Holiness’s birthday in 1993, and carried on for over a month at different venues.

In the following years AMI also organized exhibitions of the works of a number of other modern artists and photographers and also the first film festivals and screenings of films by Tibetan filmmakers. AMI’s many endeavors and achievements in these and other fields deserves to be described in a book to itself, or at least a lengthy essay which I intend to write one of these days. It was a truly revolutionary institution in exile Tibetan society and in its mission to spread the awareness of contemporary Tibetan art and culture the Amnye Machen Institute was, in the words of art historian Claire Harris of Pitt Rivers Museum, “… a radical organization trying to negotiate a vision of the future Tibet.”