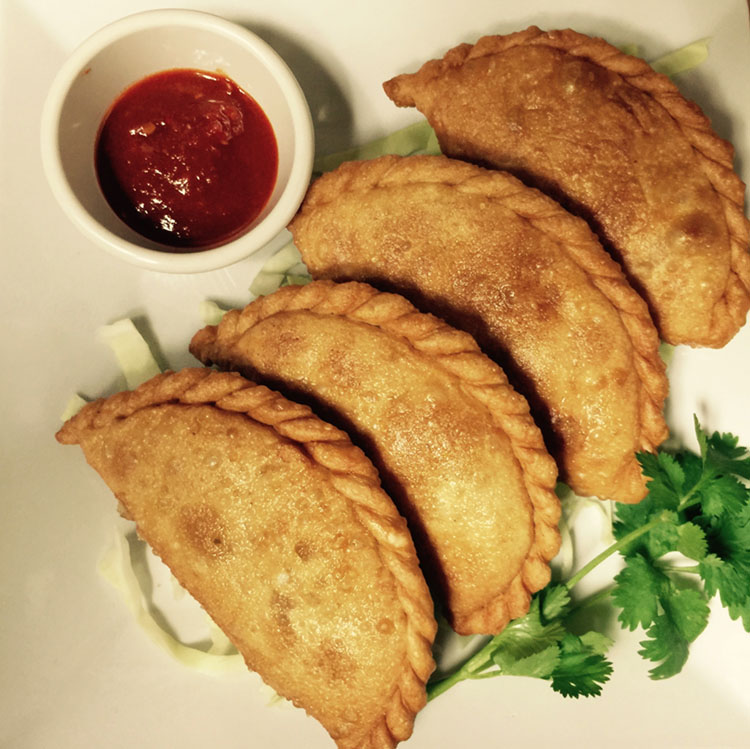 We were having dinner at the very cosy Little Tibet Restaurant at Jackson Heights last month. Someone insisted I try a Shabhalay from a plate he had ordered. It’s not my favorite food. The shabhalays I had eaten before had largely been products of institution kitchens (chi-thab): too oily, the dough wrap too leathery, stuffing too full of onions too little meat, even the braiding (Tib: sul) around the side often being rock hard. But the confection I bit into that evening at Little Tibet was absolutely something else. It was deep-fried but not greasy, the dough wrapping soft and succulent, the stuffing meaty and juicy. The edges were slightly crisp but soft and tasty.

Some days later someone gave me a take-out shabhalay from Friends Corner (also at Jackson Heights) which was equally delicious. And why shouldn’t they be? Properly done the shabhalay belongs to a great tradition of stuffed bread pastries from around the world, among the more well-known being the Spanish empanada, the Italian calzone, the Cornish pasty, and the Mongol Khuushuur which is stuffed with mutton. But generally they are filled with beef, cheese, ham or combinations of one or the other. They all look pretty much the same though.

Most of these are baked but  and there is a deep-fried version of the calzone called the panzerotte. The Dutch kaassouffléis also fried in oil, while the Khuushuur is deep-fried in mutton fat.

Tibetans make a “Sokpo (Mongol) Shabhalay” which is nothing like the Khuushuur,  but is lip-smackingly delicious. The unique thing about this shabhalay is its two-stage frying. For details check the excellent recipe on the website Simply Tibetan, Simply Delicious.

During the 1987-1989 Lhasa uprisings,  the inoffensive shabhalay, took on a what might be described as a subversive even revolutionary overtone. Earlier, the only connection shabhalay had to anything remotely forceful was the Tibetan expression “a shabhalay on the butt” (kup la shabhalay), which is a jokey way of telling kids you’ll whack them. A Tibetan rapper in Swizerland picking of on this reference has called himself “Shabhalay” and made a few  music videos for educating young people.

But as the uprisings in Lhasa continued and the prisons in and around the city filled up with many hundreds of arrested demonstrators, the parents, relatives and friends of these prisoners had to bring them food from the outside. Prison rations in Tibet and China are essentially designed to starve the inmate slowly into ideological submission, many dying of malnutrition or disease before that. One arrested demonstrator (who I later met in Dharamshala) noticed that the overwhelming number of visitors brought shabhalays for the prisoners. He figured that the shabhalay had a number of virtues that made it the ideal prison food. The dough wrap provided the carbohydrate, the meat-filling the necessary protein, and the frying in oil or butter, the vital fat content you needed to stay alive in the cold of Tibetan prisons (especially Sangyip which is sub-artic all year round). The shabhalay was also convenient for both the delivery person and the prisoner. You didn’t need dishes or spoons or knives. You just held it in your hand a like sandwich or a calzone and ate it warm or cold, standing up, or walking in a prison line.

Because there were so many shabhalays circulating in the prisons, prisoners passed them on to each other, sometimes even to a guard. It was so ubiquitous it jokingly began to be called rangzen-bhaley, or independence bread. The occupation authorities immediately imposed a total ban on the bringing of shabhalays to prison, and even a ban on making or selling it in the city. I don’t know how long the ban was enforced but I am sure that it was effective for the period. I am also sure that the authorities were deadly serious when they made their proclamation. Even a mention of shabhalay might get you hauled up for an interview at the police station.

A wise China scholar (who shall remain nameless) once told me, without a trace of sarcasm,  that the fundamental operating ideology of the PRC was institutionalized paranoia.

20 Replies to “Frying Up a Revolution”