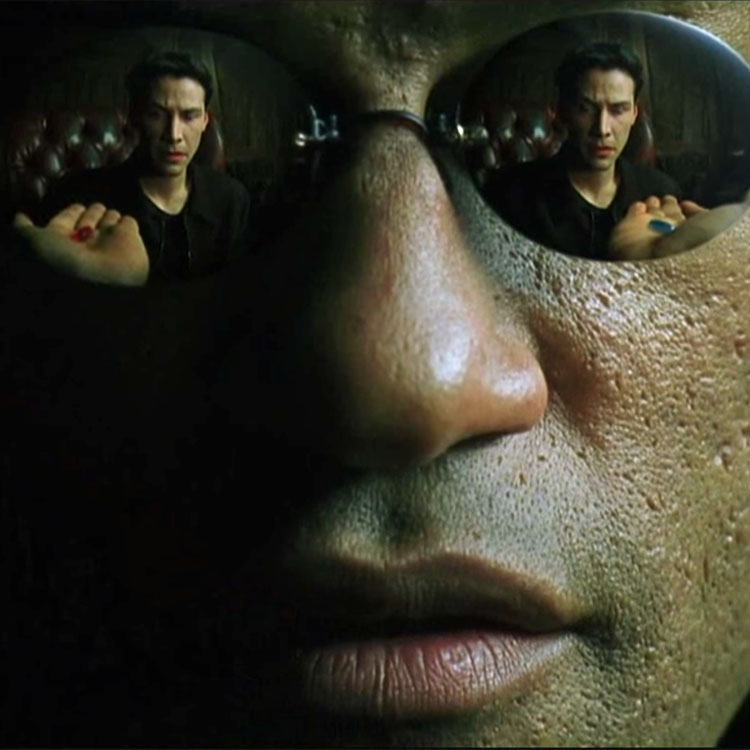 Last November, as I was preparing to fly to Toronto for my talk “Forging a Rangzen Strategy”, I received an email from Gashi Tenpa la, one of the TNC organizers there. He had an amusing suggestion for a concluding message I could leave the audience: “Jamyang la, don’t forget to tell them to choose the ‘Red Pill’”.

About a third of the way into the cult-classic science fiction film, The Matrix (1999), the main character, Neo, is offered a fundamentally life-altering choice in the form of two pills: a red pill representing the painful truth of reality and a blue pill representing the blissful ignorance of illusion.

The movie is fairly bursting at the seams with implied philosophical references: from Plato’s “Allegory of the Cave” and Descartes “Meditation on First Philosophy”, to rather conspicuously, Jean Baudrillard’s Simulacra and Simulation. The film also freely borrows ideas from a number of religions, of which the central concept of the “Matrix”, the all-embracing digital world of illusion in which humanity is enslaved, is clearly a metaphor for the maya of Hindu philosophy, and to a point the samsara of Buddhism. It is also, I think, a not inappropriate metaphor for the current Tibetan political situation.

The Tibetan leadership and much of its following-in-exile have become mired in a state of chronic delusion created in large part by our prevailing culture of blind faith, sycophancy, corruption, and intellectual indolence. There has also been the occasional manipulation of this mind-set by Communist China through some of its indirect agents of influence operating in the liberal democracies (politicians, academics, journalists, celebrities, even certain NGO’s). In the last few years this manipulation has been taken up more directly by the PRC’s own agents almost certainly planted among those Chinese “intellectuals” and “tourists” regularly meeting the Dalai Lama.

However depressing the situation, many Tibetans have, in recent years, come to realize that the official Middle Way Approach (MWA) policy has been disastrous for the Tibetan political cause, and for the unity and well-being of the exile community. Yet this growing public awareness has had little impact on our political reality, since most of these people have been reluctant to openly express their concerns for fear of offending the Dalai Lama. Even among those Tibetans openly advocating independence from China as the only possible salvation for Tibet, many have shied away from taking the one final step necessary to making their commitment a meaningful one. All these people though making the initial difficult decision and choosing the red pill, have subsequently been unable to swallow it, and instead kept rolling it around their mouth like a Ricola cough-drop.

To put it simply, most people who believe in Tibetan independence still cannot give up the hope that they could somehow, eventually, arrive at some kind of understanding or compromise with the official MWA policy, and more importantly, remain in the good books of the Dharamshala establishment and, of course, His Holiness the Dalai Lama – even while supporting or even advocating a policy completely in contradiction to his wishes.

To be fair, this did seem doable some year ago. The Tibetan Youth Congress (TYC) which though championing Rangzen as it core goal, was granted regular audiences with the Dalai Lama and even received the occasional praise and blessing. The same could be said for the Students For a Free Tibet (SFT). The unwritten rule of the game was that you never expressed any criticism of Dharamshala or its policies, and did not pose any direct threat to the power of the leadership.

All that changed radically around the time Samdong Rinpoche (the self-appointed ideologue and Svengali of MWA) issued his now infamous warning to Tibetan society that Rangzen advocates were more dangerous than the Communist Chinese. Samdong did walk back his statement a bit, on an occasion or two, but in a cynical Donald Trump fashion “Mexican immigrants are criminals and rapists. I love Mexicans.”

TYC branches in South India were infiltrated by MWA followers which effectively began the process of neutralizing the largest Rangzen organization in exile society. At the beginning of this year the New York/New Jersey branch of the TYC was also taken over by MWA henchmen. The 2015 March 10th commemoration in New York City was also hijacked by MWA, whose leaders tried to get the NYPD to remove, even arrest, demonstrators (including two SFT leaders) displaying FREE Tibet signs and shouting anti-China slogans.

I am not sure about this, but I heard from Dharamshala that of late, scholarship students from India entering American universities have received “advice” not to join SFT chapters in their schools. We also know that the Gu-chu-sum Political Prisoner’s Movement, which once advocated Rangzen has been pressured to give up its core goal. Even the New York branch of the Chushigangdruk, the present day welfare organization of the great resistance force, has also been browbeaten into give up its goal of Tibetan independence.

The most recent evidence of Dharamshala’s efforts to marginalize and push out all Rangzen advocates from the exile political process has been the widespread demonization of Atsok Lukar Jam, the only Rangzen candidate in the Sikyong elections. The apparantly officially sanctioned efforts to deny him speaking opportunities in the major monasteries in South India and in schools and colleges under the CTA, also point in that direction. Last minute fraudulent rule changes made after the polls had closed in the first round of elections, appear designed to keep out Lukar Jam from the second round of elections, and ensure that no discussion or debate takes place on the issue of Tibetan independence in the forthcoming campaigns. I have gone into detail on this in my previous post and have also mentioned how the Dalai Lama himself and members of his family have made very troubling public statements that could be construed as condemning all Rangzen advocates as anti-Dalai Lama.

In an official statement on December 10th, resembling the “lese majeste” attacks of the Thai military junta against journalists and critics, the CTA declared that “… at a time when Tibetans are expressing gratitude to His Holiness on his 80th birthday, we have a few people who indulge in crazy talk and sarcasm by calling His Holiness a traitor. Such actions are immoral…”

It is becoming clearer than ever that the CTA’s on-going exclusionary agenda for Rangzen advocates has taken on a disturbingly authoritarian turn. In Dharamshala staff members of CTA offices are now required to take a pledge of allegiance to the MWA Policy, and by extension, rejection of Rangzen. I have it on good authority that even menial kitchen workers (ma-yok) have been instructed to take this pledge or lose their jobs. It is just a question of time before Rangen advocates are asked to sign such a pledge or be hounded out of Tibet society. Should we also fear for the future of those courageous members of the exile parliament who have on occasion spoken out in defense of SFT and Rangzen activists?

What can be done?

Rangzen advocates must absolutely give up the delusional hope that the Dharamshala establishment can be persuaded to see the futility of the Middle Way policy. The reality is that most of the leadership are already well aware of that. They may be corrupt and self-serving but they are not fools. For these leaders and for all their lowlife thuggish followers (like Ngawang Palden and his gang in New York currently trying to terminate the TYC chapter there as a freedom fighting organization) MWA is a meal-ticket to jobs and positions they would otherwise be unable to secure with their own limited ability and education. Through their shrill advocacy of  the Middle Way Approach and cynical condemnation of Rangzen supporters, they are preying on the Dalai Lama’s desperation to prop up a failed policy (and his own political legacy) that in reality has been murdered and laid to rest (countless times) by China’s leaders.

Tibetans who stand for freedom and independence must now openly declare their conviction, join together, and through the democratic process, bring about a root-and-branch transformation of the exile administration. I now believe, more than ever that this can be done. I will elaborate in my next post.

93 Replies to “The Matrix in the Middle Way”