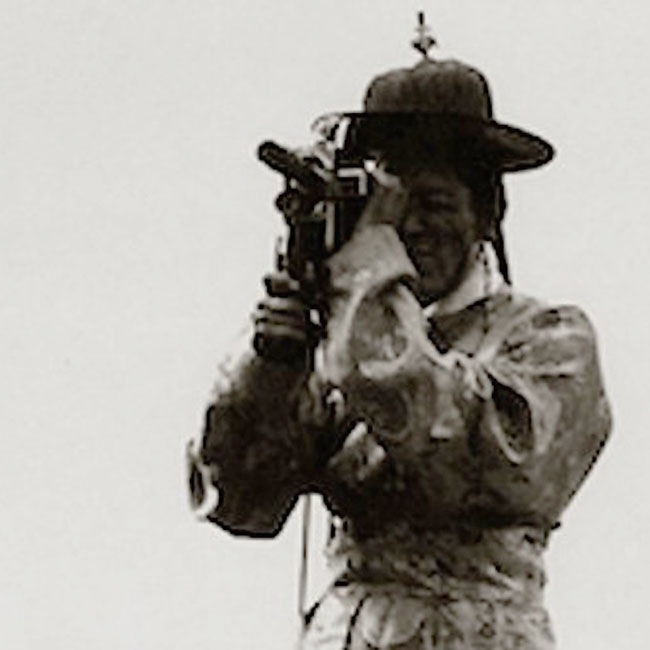 Last year, when putting together the March 10th Memorial website, a major problem I encountered was obtaining photographs and film footages for this critical period in our modern history. Three black-&-white photographs were all there was of the public demonstration on the morning of March 10th.

Possibly the most reproduced of these three photos is that of the enormous crowd gathered before the eastern gate of the Norbulingka palace. A snow lion statue is in the right foreground with the scene extending back to somewhere near the Chango bridge on the Norbulingka–Lhasa road.

The second photo gives us an even further view of the crowd and shows people from Lhasa streaming to joining the gathering. You also get a glimpse of the Chakpori in the distance. The third photo is disturbing. We have a partial view of the mutilated body of Phakpala Khenchung Sonam Gyaltsen behind one of the two snowlion statues in front of the main gate, surrounded by people brandishing daggers, swords and even a hatchet.

A few of the people are looking up at the photographer who evidently took his picture from one of the two squarish turrets on either side of the main gate, most likely the one on the right as the head of the snow-lion is turned to the left. All three photographs have most likely been taken by the same photographer as the vantage point of all three images appear to be the same.

My guess is that the photographer was probably Jigme Taring. The people knew him as the Dalai Lama’s official photographer and perhaps that’s why don’t appear particularly hostile to him. We know the public was otherwise very angry, even violent that day. Of course we cannot be certain that Taring took these photographs, but so far I have not come across any mention of another official in the Norbulingka that day who might have  taken these photographs.

It is further possible that Jigme Taring also took the two photographs we have of the women’s demonstrations before the Potala Palace at the Dribu Yukhai Thang (where government barley was threshed).

Jigme Taring was in and out of Norbulingka in the subsequent days, but during the night of the artillery barrage and the next day of the PLA attack he was definitely inside the Summer Palace.  It is therefore more than possible that the color images below of armed Tibetan volunteer fighters  inside and outside the Norbulingka walls were taken by Jigme Taring. These scenes were shot on color film, most probably on the “official” cine-camera that Jigme Taring had earlier used to film the Dalai Lama’s geshe examinations.

He had probably used what was left of his color film stock to record the scenes at the Norbulingka. We now know that in the chaos Taring left the cine-camera behind in Norbulingka with a young official, and it is almost certain that the Chinese later obtained the camera and film. Some of the footages taken by Taring later appeared (in black& white) in the Chinese propaganda film Putting Down the Rebellion in Tibet. The Chinese  Propaganda Department was then using black and white film, and only a few years later used color film for their documentary, By The Lhasa River. The color footages of the Taring film have also appeared in other documentaries and are probably now available somewhere in Beijing.

The following images are screenshots taken off a video made from the color film. In the first image the person sitting in the foreground, right, looks very much like a young Juchen Thupten Namgyal of Derge, who in his 22 volume (!) autobiography mentions that he was a volunteer defender at the Norbulingka.

The Chinese also shot some black & white footage of Tibetan volunteers outside the Norbulingka though it was understandably taken from a distance. A Chinese journalist Shan Chao [1] accompanied some PLA officers in a convoy of three armored cars on Monday the 16th to survey the trenches and fortifications the “rebels” were building at the northern end of the Norbu Lingka. A cameraman from the propaganda department recorded the scene on film.

In conclusion I would like to dedicate this post to the memory of Jigme Taring – photographer and man of courage. In March 1959 he went to  the Norbulingka to serve and protect the Dalai Lama and remained there through the period of the Dalai Lama’s escape, and during the subsequent fighting.

In his autobiography the monk official (tsedrung) Tenpa Soepa[2] mentions meeting Jigme Taring during an intense artillery bombardment. “I came across Taring Dzasak who asked me for help, and we went inside the Phodrang Sarpa (New Palace). All the windowpanes were broken and the floor was filled with shards of glass. Taring Dzasak took out a (cine?) camera  and a few rolls of film from a room below the Phodrang and said, pointing his gun to his head said, ‘Lets get going, If worse comes to worst, this is the way’. He clearly meant that if nothing worked, we would have to take our own lives. As we came out of the Phodrang, a shell landed near us and exploded; when the smoke cleared, Taring Dzasak was nowhere to be seen.”

According to Mrs. Taring [1] her husband  told her (in exile) that he had taken the official cine-camera from the Dalai Lama’s palace and shot scenes of the fighting and artillery bombardments. He then gave the camera to a junior official to look after, but never met him again. He then took a rifle from an official who did not know how to handle it and joined in the fighting. Finally he and a soldier, Pasang Thondup, attempted to escape. “To avoid being tortured by the Chinese they made a pact that if either of them was hit by a shell, then the injured one should be shot dead by the other.” But both of them managed to escape. “His only possessions when he fled was a camera, some film, a pair of binoculars and a revolver.”

On his way south he was stopped by Chushigangdruk fighters but convinced them that he was Taring Dzasak and that the photographs in his camera were invaluable and should reach the Dalai Lama. They let him go. This camera was most likely his still camera with which he took the three black-&-white photographs (and the women’s rally photos) discussed at the beginning of this article – which have immeasurably benefited our history and struggle.

44 Replies to “The Mystery of the March 10 Photographer”