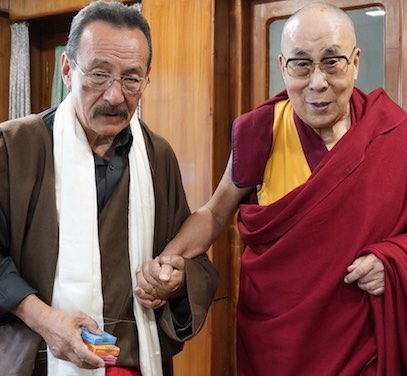 Recently in a video interview with Voice of Tibet, a staff member of the Dalai Lama’s Private Office, Ngaba Tsegyam-la, claimed I had misrepresented the Dalai Lama’s statements in an audience I was granted last year; that I had claimed the Dalai had said “struggle for independence” (rangzen tso-sho) and that the Middle Way policy was “a beggar begging for food” (umaylam pango tho longen ray). If Tsegyam la had read the post My Personal Audience with the Dalai Lama and also listened to the attached audio, he would have realized I had clearly written that His Holiness had said it was vitally important “… that we unearth historical evidence of Tibet’s independence and make it known not only to the world but even to the Chinese.”  His Holiness also said “… without proof of Tibet’s independence the Umaylam policy would be like a beggar begging for food.” I think there is a fundamental difference between his version and mine.

I stand by what I had written. I make this assertion with full confidence as I jotted notes on every detail of the audience the same afternoon, when my memories were fresh. I also wrote my blog-post and posted it two days later on the 30th.

Unlike myself Tsegyam-la seems to have recalled my conversation with the Dalai Lama ten or eleven months later, which is enough time for memories to fade away or even be distorted and garbled. I am sure this is the case. If for instance a journalist had misreported a statement by the Dalai Lama, would staff members of the Private Office issue an immediate rebuttal or correction, or wait for ten or eleven months to do so?

So why this long wait to challenge my alleged misrepresentation? It puzzled me and I tried to recall if I had said or written anything recently that might have provoked such a reaction. Going through my website I came across a recent exposé I had written of former exile-premier Samdhong Rinpoche’s efforts to undermine the Tibetan freedom struggle, “Extinguishing the Embers of Freedom (Part 1)”.  Could this have been the provocation?.

Samdhong though ostensibly retired is still very powerful and influential, and is said to head the Dalai Lama’s Gaden Phodrang Trust. Samdhong has a long and open history of hostility to Rangzen activists and intellectuals and has openly declared that those Tibetans struggling for independence are more dangerous than the Communist Chinese. So was this attack on me perhaps payback for my exposé?

Whatever the case may be, this unpleasant incident at least gives me another opportunity to thank His Holiness for the memorable audience he granted me last year, speaking with me for nearly an hour, and assuring me that all those Tibetans struggling for Rangzen would receive his thumon –– would be in his heart and his prayers.”

One last point. I am also accused of misrepresenting my audience by claiming that His Holiness “wanted to see me”,  but that I was merely granted an audience in a routine way, because I had requested it. In point of fact I had earlier requested an audience through Takla Tenzing-la. He replied by email that Holiness’s schedule was extremely hectic and a private audience would not be possible. However we delegates at the Rangzen conference received a public audience. A day later I received an urgent and unexpected phone call from Tseten Samdup-la of the Private Office informing me that his Holiness wanted to see me.