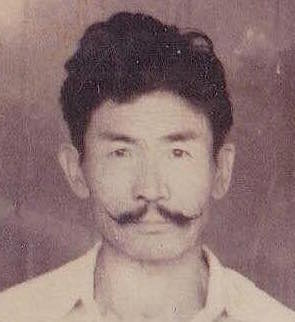 What does this 1975 photograph of woman combat paratroopers have to do with the events of March 1959?  Someone forwarded me the picture on a Facebook post and I was immediately taken by it. I messaged the page user, Tenzin Choden la, who told me that one of the soldiers in the photo was her mother. I wanted more information so she arranged for me to talk to her amala, Tsering Dolma (top row center in the above photo).

Tsering Dolma-la was born in Lhasa in 1954. Her mother Trinlay was a Central Tibetan (Üpa) and related to the Chushul Samkhar family. Her father Lekshey (born 1914) was an Amdowa from the Hortsang district in Eastern Amdo. Lekshey was a trader and imported and sold Chinese imports in the city, though he did not own a store. The family lodged in different places in the city at different times, but around 1959 they were living in the Dodé valley, immediately east of Sera Monastery.

When the Uprising started, Lekshey, like many other people in the city, hurried to the Norbulingka to protect the Dalai Lama. Lekshey’s wife Trinlay participated in the Women’s demonstrations. Once the Chinese artillery bombardment started and fighting broke out throughout the city, Trinlay and her children stayed home while Lekshey joined the defenders of the Norbulingka.

After three days when the fighting finally ceased, Trinlay went to look for her husband. Many Lhasa women were doing the same, searching through the heaps of bodies of slain fighters around Norbulingka and elsewhere. Although Trinlay and her children looked everywhere they could not find Lekshey. The next year and a half were difficult times for Tsering Dolma and her family. They had no one to provide for them and had to struggle with food shortages in Lhasa. The youngest child died.

Luckily a Newari trader who had done business with Lekshey secretly contacted Tsering Dolma. Lekshey had managed to escape to Kalimpong and had met the Newari there. Lekshey sent them some money and urged them all to leave Tibet. With the help of the Newari friend they managed to escape to India. The family was reunited in Kalimpong, where Lekshey told them how following the bombardment and the PLA attack, he and other fighters were forced to retreat from Norbulingka and make their way south where they joined the Chushigangdruk in Lhoka. Lekshey was shot in the throat and had a bad wound but he eventually recovered. The family was relocated to the Bylakuppe settlement in South India.

Tsering Dolma attended the Tibetan school at Bylakuppe but in the June of 1973 officers from the Special Frontier Force came to the settlement to recruit women volunteers for the force. Tsering Dolma remembers that 25 girls volunteered in Bylakuppe and another 25 in Mundgod. Tsering Dolma volunteered. Her father did not object but told her it would be a hard life for her. He died two years later.

The women volunteers went through the same basic training as the men and also made the six jumps for their paratrooper “wings”. Tsering Dolma remembers that it was a very scary experience for the girls, all teen-agers, and sometimes some of the girls were in tears, but none of them ever balked at the plane door or refused to jump. I heard that some of the girls had to be weighted down as they were underweight ­­–– underage in some cases. Looking at the photographs I am amazed at how physically slight some of the girls were. They also made more jumps from helicopters and other planes as the C46 cargo plane. They all jumped as combat paratroopers –– fully armed and equipped.

In 1975 the girls were told that they had to do a special jump demonstration for the prime-minister of India, Mrs. Indira Gandhi. On the big day the girls all made perfect jumps, landing with their weapons and gear in simulated battle conditions with explosions going off around them.  Mrs Gandhi was very impressed with the girls and in her speech told them that they were the first women combat paratroopers in the Indian military. She invited the girls to New Delhi to her residence for tea. The Prime Minister also arranged for the girls to have VIP seats at the Republic Day parade on 26th January 1976 –– which was a great honor for them.

Tsering Dolma left the Force some years later, as one of her younger brothers joined SFF, which allowed her to seek an honorable discharge. She married and emigrated to Switzerland where she lives with her family in the Zurich area.