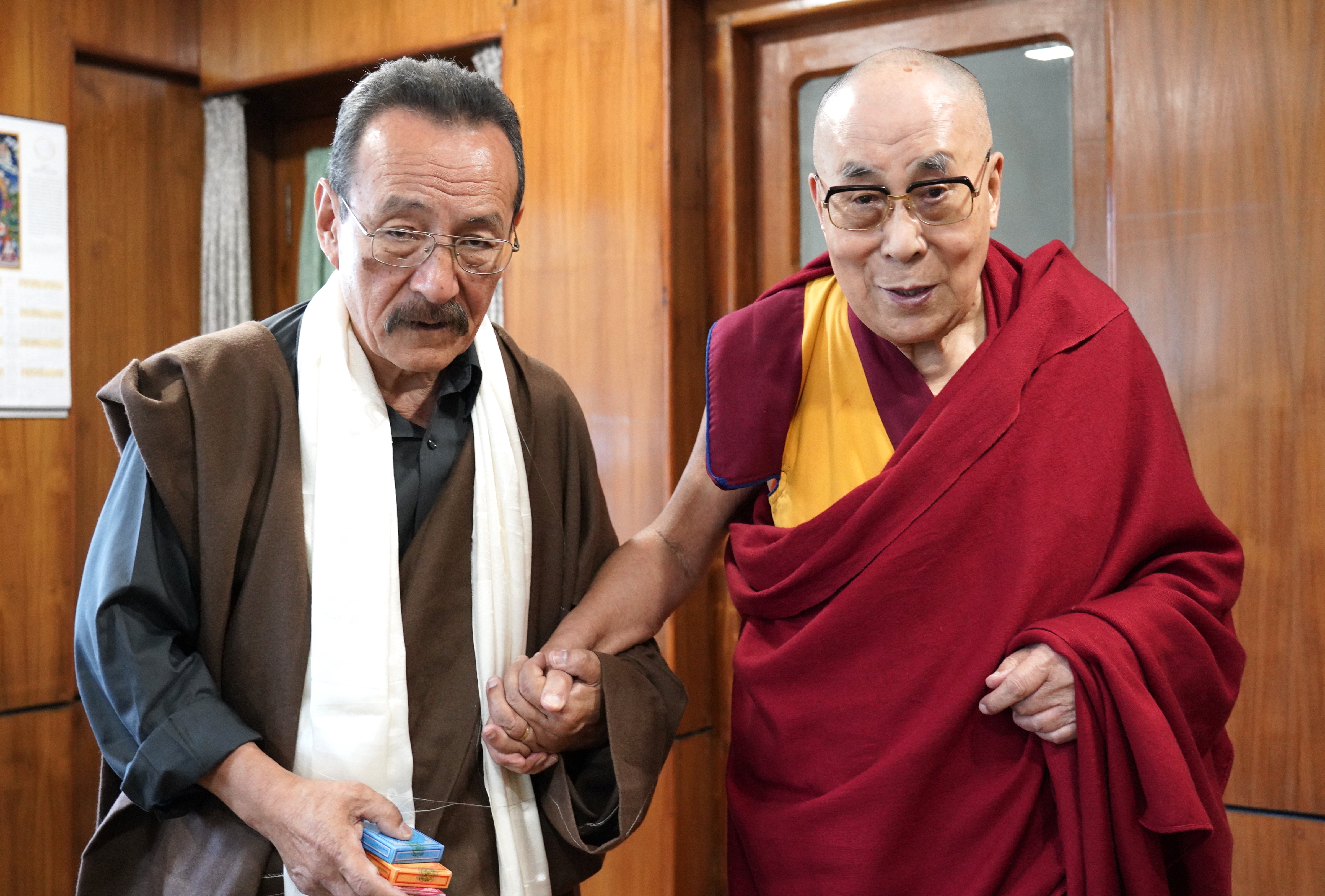 All the delegates at the 5th International Rangzen Conference received a group audience and a photo opportunity with the Dalai Lama on the last day of the conference. It was a large group and I was kneeling close by his feet (he was standing) so most probably he didn’t see me. I understand he later asked why I was not there? That afternoon I received a phone call from the Private Office saying his Holiness wanted to see me.

I received my private audience with His Holiness the Dalai Lama at 10:30 in the morning of the 28th of May. My readers will be happy to know that he was glowing with good health. I on the other hand looked like death. I had a flu/fever throughout the conference and got no sleep the night before because of a persistent cough. He must have noticed my poor condition for the first thing he said on seeing me was “porto chak duga” (you’ve become old). I replied “Yes your Holiness and my knees aren’t doing great either, but I will complete my prostrations.”

When we sat down he asked me “You first came here in the sixties didn’t you?” I replied in the affirmative. He continued “You know, we managed to do a great thing then, together. In 1959 in Lhasa Tan Guan San had given orders that the rebels should be wiped out and his artillery had destroyed so many of our people at Norbulingka and Chakpori and else where. After I escaped the Chinese were convinced that we Tibetans were finished, and there was nothing that I and other Tibetan exiles could do. But we proved them wrong didn’t we?”

“Yes, we certainly did your Holiness.” I replied.

“We not only rebuilt our society and government but we managed to bring the Tibet issue before the world in a way that had never happened before – and we did it together.”

He reminisced on this topic for a while and then he said. “I want to talk to you about the Middle Way Policy (Umaylam) I don’t want to argue (tsopa gyapge men). I just want to explain it to you.” He went into a comprehensive explanation of how many world leaders agreed with him and supported his policy and how President Obama had even given him a letter stating that he fully supported Umaylam. He also explained to me how many Chinese from the PRC, especially intellectuals, had now come around to understanding the Umaylam policy and were supportive of it.

I interrupted him to explain that this was what Rangzen advocates and activists were tirelessly doing at every possible opportunity. I told him about the portable exhibition “Rangzen Terzod – The Great Knowledge Treasury of Tibetan Independence” (Maps, Treaties, Photographs, Artifacts, passports and documents authenticating Tibet’s Sovereign Independent Status) that members of the Tibetan National Congress (TNC) had set up before the United Nations in New York, to educate passing officials, visitors and others.

I also told him about the March 10 Memorial website I had set up with the help of many TNC volunteers, that provided through rare photographs, videos, mini-bios, time-lines, and a dynamic map of Lhasa, a full account of the protest demonstrations, the battles, and escape of the Dalai Lama. I told him about the “Rememberance Wall (pawo-pamo drendhen chakri)”  where we had put together many biographies and photographs of all those who had participated in the Uprising. I mentioned in particular the Dalai Lama’s own private secretary of many years, Kungo Tara, who had not only taken over the defense of the Norbulingka Palace, but also attempted to relieve the beleaguered defenders of the Chakpori Mountain.

His Holiness became reflective at the mention of Kungo Tara. He then explained to me and to two officials Tsegyam la and another, by the door, that Tara was a very brave and loyal man but also a bit quirky. Tara personally dug a deep trench in the Norbulingka garden and instructed His Holiness on how he was to hide in it when the Chinese artillery barrage started. His Holiness laughed at the recollection. I also told His Holiness that on the “Rememberance Wall” we also had accounts and images of Tsarong Dasang Dadul, Dronyerchenmo Phala, Lobsang Yeshi and other officials who had worked to ensure his safety and his escape from Lhasa.

I told him how recently the Tibetan Nation Congress had celebrated in New York City the Centennial of the defeat of Chinese forces in Chamdo in April 29 1918 and the liberation of Eastern Tibet—an event that Khampas remembered as “The New Epoch of the Earth Horse” (kalpa sa-ta lo). His Holiness said that he remembered hearing of this historical event and asked me “Wasn’t you grandfather a general during this war?” Turning to his aides by the door he explained to them that Tethong Dapon was said to have special “enemy subduing” (Tib: dra-thoe) powers, and that when other generals failed Tethong Dapon was able to defeat the Chinese.

His Holiness then remembered the time when after the American withdrawal of support for the resistance we had discussed where we might locate weapons and support. He laughingly mentioned a harebrained scheme I had proposed to buy weapons from Afghanistan (which I honestly don’t recall) and he had a good laugh. But I reminded His Holiness how Gyari Rimpoche and I had managed to get French Intelligence to provide funding for our networks, and how I was sent to Paris by the Private Office. He remembered. He pointed at me at told his aides, “this fellow was our spy there!” He then said “None of these worked out in the end.” No Your Holiness” I admitted “by the end Lhamo Tsering la was arrested, Gyato Wangdu was killed by the Nepalese army and the whole resistance structure had fallen apart.

I think we may have talked for over fifty minutes of more, and his Holiness seemed to be enjoying himself. He even ventured into a theory of his, that based on the migration of the earliest humans out of Africa and their movement north to Europe and eastward to Asia, it seemed to him logical that humans had evolved in Tibet first and only later in China, which is further east. I told him of a recent study I had read in Scientific American that new genomic analyses by Chinese scientists had shown that Tibetans had existed on the plateau in the middle of the last Ice Age, 64,000 years ago, multiplying the earlier figure of 16,000 years as much as fourfold.

His Holiness also reflected how even such folk myths on the origins of the Tibetan people, as the story of the Monkey Bodhisattva and the Rock Ogress might have some basis in fact. I remembered an article in the journal Nature about a cousin of the Neanderthals, a Paleolithic-era species of the genus Homo, the Denisovans, who had mated with early Tibetans, and conferred on the Tibetan DNA make-up a special gene variant, which gives people of Tibetan ethnicity their unique ability to survive at extreme high altitudes – and I told His Holiness about it. He was even more pleased when I told him that a Tibetan, Dr. Tsewang Tashi was a co-author of one study led by the University of Utah, on this subject. His Holiness tasked me with following up on all such discoveries and letting him know about it.

Finally the audience came to an end. His Holiness said “We must take a photograph together. Where’s the photographer” He then rummaged inside the drawer of his desk and gave me a few packets of medicine. “These are “Precious Pills” (rinchen rilbu). These will help you not to become porto before your time. Stay in good health. Before receiving his blessing (chawang), I said that I had a special request for him – that all those struggling for Rangzen would receive his thumon – be in his heart and his prayers. He replied “Of course, most certainly” (yin-ta-yin), you all need not worry (semdrel che go maray).

I offered His Holiness my heartfelt thanks and left.

82 Replies to “My Personal Audience with His Holiness”