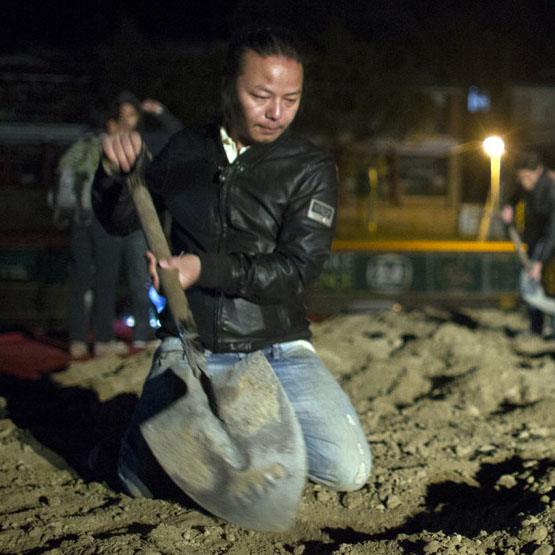 For a shoe-string budget film, Bringing Tibet Home is surprisingly rich and multi-layered. The basic story concerns a “site-specific” art installation of a well-known New York-based Tibetan artist. It is also the story of a son’s remorse at being unable to fulfill his father’s dying wish, and in addition, a kind of “escape-from-Tibet” story with all the tensions, frustrations, heart-stopping moments and out-of-the-world landscapes involved. Like all escape-from-Tibet stories you also get your final “arrival-at-Dharamshala” moment and, of course, an audience with the Dalai Lama.

The movie has a politico-spiritual stratum that perhaps the artist and protagonist (Tenzin Rigdol) and film director (Tenzin Tsetan Choklay) did not explicitly intend. Yet it is there, and it pervades the film subliminally, especially towards the end. It is for me the profound and deeply rewarding message of the film.

Tenzing Rigdol’s family were refugees in Nepal. His mother a carpet designer, gave Rigdol his first lessons in drawing and coloring. The family immigrated to the United States in 2001. In 2009, Rigdol’s father was diagnosed with cancer. In the months that followed, Rigdol stayed by his father’s side and shared with him his memories and his unfulfilled longing to see his lost homeland. Rigdol’s father eventually lost the battle with cancer. He died in Queens, New York, exactly on the other side of the world from his rural birthplace in Lhobrag district, bordering Bhutan.

One could say, in some basic sense, that art is about transcending the dreariness and tedium of our daily lives and creating something meaningful, hopefully even inspirational, from our pain and tragedies. Reflecting that his father’s unfulfilled yearning was shared by every Tibetan exile, Rigdol tried to think of a way he could, as an artist, realize this shared dream as a collective experience – a way to “bring Tibet home” to all exiles. Eventually he hit upon the idea of carrying, or rather smuggling, out of Tibet, a large quantity (20,000 kilos) of soil, and transporting it to the exile capital of Dharamshala and allow Tibetan there to touch, feel and set foot on the sacred soil of their lost homeland.

The actual execution of this project takes the film into the realm of an “espionage thriller”, as a British reviewer noted. Tenzing flies to Kathmandu and sets up base at an old uncle’s house at Baudha ­– by the Great Stupa. All his planning and preparations are necessarily clandestine. Not only must the Chinese border police be misled, but even China’s ubiquitous State Security (Gongan) agents operating in Nepal – keeping tabs on Tibetan exiles – must be eluded at all cost. Nepal itself had by then, succumbed to China’s economic blandishments, and the Nepalese police was cracking down hard, even violently on Tibetan refugees expressing any political sentiments deemed offensive to China.

Rigdol has, fortunately, one ace in the hole. An old schoolmate, Topden, living in Kathmandu, is a loyal friend and also an accomplished “fixer”. He sets up a meeting with a “contractor” from Tibet, who agrees to ship a full truckload of soil from Shigatse to the border-crossing town of Dram or Kodari. He will also make the necessary arrangements for the Chinese and Nepalese custom’s officials to waive formalities and allow the truck to cross the “Friendship Bridge” spanning the trans-boundary Bhote Kosi (Nyalam Chu) River.

But it is all easier said than done. There are delays, many delays. More money is needed by the contractor in Tibet. The truck breaks down ­– and on and on. Rigdol and Topden have to make a recce trip to Dram, which is a nerve-wracking experience for Rigdol. The two are confronted by a Chinese agent, but manage to squeak through that fearful encounter, shaken and a bit humiliated, but also safe for the present. Then more delays. Rigdol is stuck in Kathmandu. Days and weeks go by. A full month passes. The only lifeline he has to his project is his cellphone, and the tenor of his calls become increasingly frustrated and desperate. Finally the bad news comes. The Chinese have tightened their security at the crossing and the contractor backs out of the deal.

Tenzin Tsetan Choklay the director (also the sole cameraman and sound-man) draws out the tension, frustration and nail-biting anxiety of these situations in a straightforward skillful way. Nothing is overstated or exaggerated, but you are kept on the edge of your seat.

The inimitable Topden saves the day. He brings in the (literally) heavy lifters, a team of professional Nepalese smugglers, who accept the contract of getting the 20,000 kilos of soil across the border – no questions asked. Spoiler alert? No. I’m not going to give away this climatic scene. Suffice to say it was absolutely unexpected, also thrilling as something out of The Great Escape. Choklay took a real risk shooting this sequence. We should be grateful that the career of this gutsy and promising Tibetan filmmaker didn’t have to fizzle out somewhere in the dismal recesses of Kathmandu Central Jail.

Finally the soil arrives at Dharamshala. On October 26, 2011 it is laid out on a square wooden platform (larger than a boxing ring) at the Tibetan Children’s Village. Thousands of Tibetans, young and old, walk on the sacred soil, play on it, and kneel down and touch it with their foreheads. People take turns to express their feelings and share their thoughts and memories in statements, songs, verses and of course, in tears. On the opening day of the three-day event, Rigdol takes a tray of the soil and presents it to His Holiness at his residence. The Dalai Lama inscribes in Tibetan the word “Bhod” (Tibet) on the soil with his forefinger.

At the end of the event, the public is allowed to take the soil home. Everyone fills plastic bags and containers, even large sacks, till the wooden stage is empty and clean. Probably some of the sacred soil will be saved in family altars or used in the fabrication of religious images or stupas – even poured into the foundations of sacred buildings. It will certainly be used in the making of tsa-tsa images. After someone is cremated the ashes are often mixed with fine soil and water, and cast in molds of Buddha, saints and deities. These small clay images are placed on cairns (lhatse), on mountain passes, or alongside sacred circular walks (kora) around monasteries and temples, so that the prayers of the pilgrims and worshipers will benefit the deceased.

The wrapping-up of Rigdol’s soil installation bears more than a passing resemblance to the conclusion of a sand-mandala initiation where the complex colored-sand design is ritualistically destroyed to symbolize the transitory nature of all phenomena. Initiates even take small quantities of the colored sand home as spiritual keepsakes.

Did Rigdol consciously or unconsciously have something like this at the back of his mind when planning his soil project? I don’t thinks its too much of a stretch to ask this. Rigdol’s installation might be seen as a minimal mandala of soil – colors and complex designs being unnecessary because of the inherent sanctity of the soil itself. Another parallel. The sand mandala is usually created on a square plywood base like a scaled-down version of the large square wooden stage of Rigdol’s installation. The mandala is an artistic representation of a divine cosmic realm, across which initiates must visualize making their spiritual journey. But we could say that Rigdol is giving us the opportunity to walk on the actual soil of the one sacred realm that is not symbolic or legendary.

So, this is the message I took from this strange but compelling film, and, as I said earlier, it might not be the message that Rigdol or Choklay intended. As rich, complex and fascinating as the rituals, imagery, legends and myths of our spiritual culture may be, they are, in the final analysis, only symbols and stories. The only true magical realm there really is, the only Shambala, the only place that actually matters, the only soil whose recovery and liberation we should be focused on, 24/7,  is our sacred but lost homeland – Tibet.

9 Replies to “Resurrecting a Lost Homeland”