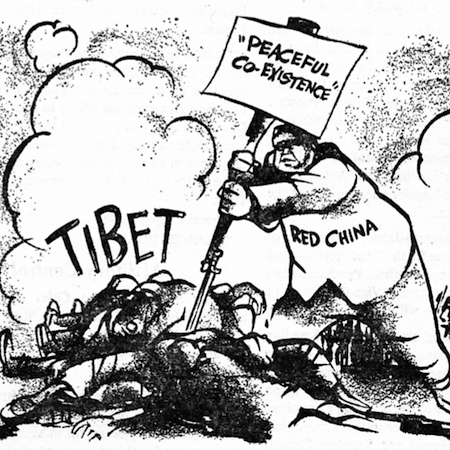 The big news following the 59’ Uprising was, of course, the escape of the Dalai Lama from Lhasa, which was featured in cover stories in TIME, LIFE, Reader’s Digest and other journals and papers.  But the world press also took note of the violence and oppression taking place inside Tibet and journalists attempted to cover it, without much success ––understandably enough.

Some M10 Political Cartoons From Around the World

Yet a few cartoonists around the world managed to create incisive depictions of the self-serving naivety of Indian Premier Jawaharlal Nehru and the cynicism of newly decolonized countries in Asia and Africa in ignoring China’s genocidal tyranny in Tibet. I have located contributions by the famous Times of India cartoonist R.K. Laxman, and the British cartoonist David Low, best known for depicting world leaders during WWII. The first image posted above is a vivid and brutal cartoon by S.Sawak or S.Samak, an artist I could not locate anywhere. (Reader Sangya Taythi-la later identified the cartoonist as Bernard Seaman whose work mainly appeared in the American union and the labor press.)

We must, of course, not forget the cartoons that came out in Gergen Tharchin’s Tibet Mirror (Melong) newspaper. Some of these might have been drawn by Tharchin’s talented brother-in-law Rigzin Wangpo. The contraction “Rig” on the lower left of the first cartoon is perhaps an alias.

So far I have located just one cartoon (from Tendor-la) but I am sure more will follow. This one is a mocking comment on the attitude of some exiles who attend a rally once a year on M10 and feel that they’ve done their heroic bit for the Struggle.